Tony did not see that coming… 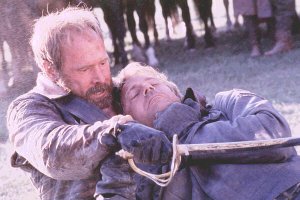 I guess this dude could be evil...

Well, Tony certainly underestimates the FBI. I mean, really, shooting himself with the handgun while Agent Moss got jacked with the shotgun?

As it turns out, the FBI is that gullible. It took Jack showing up to get someone to question his story. On this end, the Tony vs. Jack stuff was set up very nicely. In the last couple of seasons before this one they probably immediately have Jack figure out the shenanigans Tony is up to and proceed to kicking his ass.

Now? Well, they’re setting up a very rewarding kill scene when Tony gets his from Jack.

Last week we found out that there was another villain lurking out there higher up the chain than Jon Voight. Tonight, we found out that that villain would be played by Will Patton. I realize Patton probably has all sorts of rage built up from Denzel replacing him as head coach in Remember the Titans and from suckers like myself always confusing him with Bill Paxton, but really, he seems like simple prey for Bauer. Even while Bauer is seizuring he could probably whip Will Patton’s ass.

I do like how the show brought in another big name actor to finish things off. Even though no reveal on this show will top season 1’s Dennis Hopper as Victor Drazen, I applaud the effort.