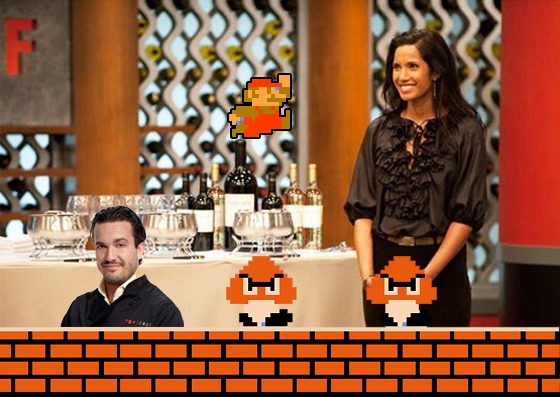 This week’s episode was all about Jimmy Fallon.  Since I’m not an elderly person or a hippie, I have cable TV and thus don’t know who he is.  But I played along long enough to see this was one of the better edited episodes of the year, right up until they gave away the fact that they were getting rid of Fabio at the very beginning of the judging.  You know when the judges don’t have ANYTHING good to say about someone’s dish?  When they give no glimmer of hope for the poor schmuck?  Well, that’s what they did to Fabio.  Here are some highlights of how I knew he was going:

So the judges ripped him a new one and the other people who were in the bottom three got compliments.  Dale’s sandwich was ‘good but too salty’.  Tiffany’s soup was ‘good but not really chicken and dumplings’.  Fabio made “dry meatloaf with green curdled cheese sauce”.  They didn’t even tell him that his plate looked nice.  Dude didn’t have a chance.  But, on a positive note, Padma may have dressed like a pirate during the quickfire (see above), but she was wearing a wicked short dress the rest of the show.  And after the jump, get a look at the deliberations with Jimmy Fallon at  judges table and imagine her short skirt.  Under the table.  Invisible to you.  Sure was short.  But enough about that – the judging was kind of interesting if you care about that kind of thing.  WHICH I DON’T!