OK, I will get to the competition and shit in a minute but first I want to know how chefs can be so stupid that they think The Bahamas has a king?  Like, don’t you think if a country that close had a king we would know?  I would.  I know that there is no king of Mexico and that the King of Cuba’s name is Steve, but then again I’m not a stupid-ass chef.

So they made them do a quickfire against the people who won the seasons they were on and I didn’t pay any attention because I could not stop thinking about how fucking hot they must have been cooking outside in the Bahamas.  I hate when they don’t make people wear sweat bands on cooking shows.  You know those fools are sweating their asses of in there.  I used to be a cook, and about 1/2 hour into my chef, I was sweating like I was in the 8th round against Drago.  Think about THAT the next time you go out to eat.

Results and TRAGEDY after the jump!

So I didn’t pay attention to who won the money in the quickfires and then I got distracted looking for a pic of Padma.  I like the one I found and I thought of putting a parrot on her arm but then THERE WAS A PRETEND KING!

See, they were told they were going to be cooking for royalty, and it turned out that it was not a “real” king, but instead some fool who was elected “king of dressing up as something”.  So then they needed to whine about how all their high-falutin’ food was not going to be good for this made up king of the yokels.  But then….

Yeah – they were all done cooking and the kitchen caught on fire and all their shit burned up so they had to start over and some people changed and some didn’t or something.  I swear they are making it really hard for me to care about this show anymore.  Also, now that I frigging think about it – didn’t they say last week that Padma was going to be in a bikini?  Did I miss that?  Good thing I have Tivo.  I’ll sue their asses.  Oh, and in case you are wondering why I am writing so much this week, it is the commercial before they announce who is getting kicked off.  Italian Mike won.  I think he made broiled “I didn’t pay attention” topped with “I don’t care” slaw.

Pictoral Interlude: here we see the judges and the King of Nothing at the place they ate at.  Is it gay that I like Tom’s red checked shirt?  It looked so comfy.  No, that’s not gay.  You’re gay. 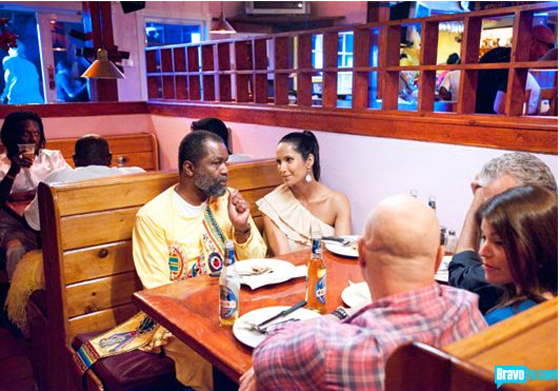 So now as I write this Tom tells Tiffany she needed some sauce.  Carla didn’t cook her pork.  Antonia just sucked it.

“Carla, please pack your knives and go”, said Padma.  I guess the possibility of trichinosis was too daunting for the sissy judges so the plucky hillbilly with the clown hair and inverted boobs got sent home.  But don’t despair, Carla.  You are plucky and entertaining and have clown hair.  You will probably get your own show soon enough.  If not on the Food Channel, you could always become a hoarder or grow a 73 pound tumor in your eyelid and be on TLC.

Oh, and they did the Padma in a bikini tease again.  They better pay up next week!