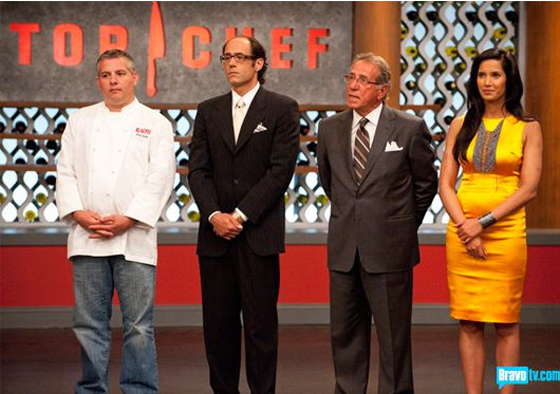 I feel like shit and this week’s episode didn’t help anything.  The one redeeming feature is that I found out that Bravo posts pics of each weeks episode the night it airs so I can give you proof that they dress Padma like a fool.  Above, you can see three mafia dudes who own a mafia restaurant and the Land O Lakes butter lady.  As for the show, results after the jump.

Richard Blaise (or as he is known to the ladies, Dick Blaze) won the quickfire that had that Isaac Mizrahi dude on it.  Isaac didn’t want to eat the food, just look at it.  Dick Blaze made black ice cream (foreshadowing).

Then in the elimination, they made people serve Italian food to Italians.  There were three courses (Italians are Catholic so they do things in threes) and three chefs made a dish for each one.  So one of the Italians (NJ Italian) was in the bottom and the other two (Italy Italian and some other kind of America Italian) were in the top.  But the guy who lost was Tre.  The black guy.  Cause his risotto wasn’t creamy enough.  See how I foreshadowed?  And anyone who watched Hell’s Kitchen knows risotto needs to be creamy.  And green.  Fool.