Top Chef All Stars – Wolfgang Puck is a War Criminal 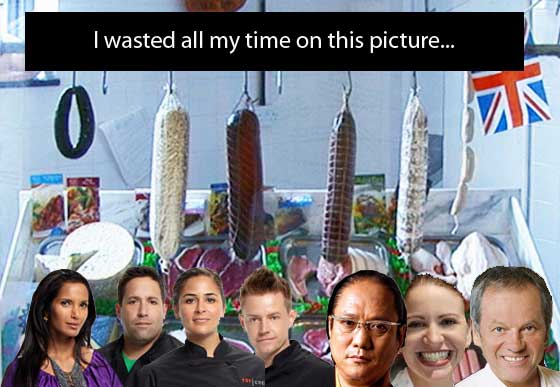 I’m not sure what war he was in, but it seems like he would totally be hiding in plain sight, you know?  I’d have a better idea of what war he was a criminal from if I knew what the hell he was.  What kind of accent is that?  He sounds like someone from Hogan’s Heroes.  Anyway – this show messes me up because they are bragging about Chef Morimoto and the fact that he is an Iron Chef.  DOES THE FOOD NETWORK MATTER OR NOT?  Fuck you all for not helping me understand.

Anyway – the quickfire was boring and then the finals was to make something for Puck, Morimoto or Michelle Bernstein.  I don’t know who Michelle Bernstein is.  And yet I know who Guy Fieri is.  Do you see now why I need some kind of ranking system?  Results after the jump.  Who is going to the finals!?!?!?

At least next week they have to make whole restaurants in the final.  They will bring back old contestants to help them which usually means a big mess and yelling.  And I saw that guy who cooks for everyone on Biggest Loser as a judge so maybe they are pulling out all the stops.  But until I see Gordon Ramsay – I call bullshit.  Bullshit I say!

One more week.  After that, one more chef will be catapulted into me not remembering them a week after it’s over.  Well done!