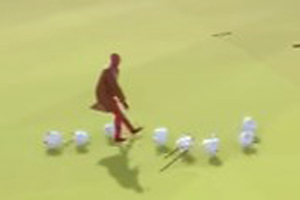 Pokemon Go has taken over the imaginations of America and given people who think they are clever a way to say Michelle Obama failed to get kids active where a video game succeeded.  Way to go.  You created a bunch of kids that will only go outside if there is a video game involved.

Not that there is anything wrong with video games.  Like Totally Accurate Battle Simulator.  There is nothing to do outside, but the people in the game are outside.  And they are made of clay and you can make them fight each other.  I mean you make ARMIES of them fight each other.  As far as I can tell, you  choose your side, choose your weapons and then let it go.  I assume I would always be the red team and based on the videos below I will be choosing chickens as weapons.  I think they are chickens.  Not the cannon, though.  You can’t shoot a single person with a cannon.  At least not on purpose.  It’s nonsense and I won’t entertain the thought.  Sign up for the beta at that link up there, then come tell me you have the game so we can fight or I can whine that I don’t have an invite yet.  GO RED!