Trigger is for Sale 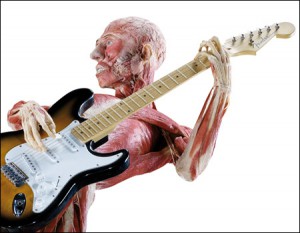 Trigger is for sale. If you’re not 87 years old or that punk girl who got TCM tattooed on her ass, that’s movie cowboy Roy Rogers’ horse. Old Roy had his pony stuffed in 1965. He had his dog Bullet stuffed, too. You get the impression that Roy would have Dale stuffed and put on display if she’d died first. You don’t know who Dale Evans is either? Christie’s says that Roy and Dale were the Brad and Angelina of their day. No wonder the Roy and Dale Museum in Branson went under; no one can stop talking about Brad and Angelina. Angelina is a freak. I’m sure she’s made plans to have Brad freeze dried in Sweden for their Branson museum. Who knows–his acting might improve.

Maybe Lady Gaga went to Branson and got the idea for her new show by looking at Trigger and Bullet? She’s teaming up with Gunther Von Hagens. The scientist who brought us the Body Worlds exhibition where real human bodies are flayed and put on display is working on a design for Lady Gaga’s Vegas show, Monster Ball. That’s right–preserved human bodies on stage with Lady Gaga. It makes stuffing your pets seem normal.

Head down to Christies in Manhattan for the big auction. The doorman is in a Roy Rogers suit with a guitar and they have hay scattered around for that country feel. If you don’t want a stuffed horse in your living room, go for Roy’s 1964 Bonneville convertible. Roy’s pimped out lowrider has collectible silver dollars glued all over it and its door handles and gear shift were replaced with silver-plated pistols. Look, Christie’s needs your support: Michael Jackson is dead so selling a stuffed horse isn’t a sure bet anymore.