Trump Stared Directly at the Sun 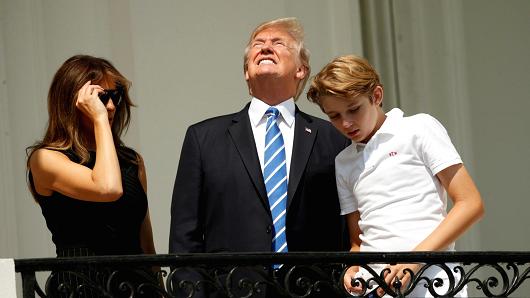 While you may have heard contradicting advice from your brother in law or your neighbor, science was 100% united on the front of “do not look directly at the sun, yes even during the solar eclipse”. Here are some pretty convincing articles:

So what did Trump do? He looked directly at the sun without glasses… apparently as an aide shouted at him not to do so.

And how did the propaganda machine that is Fox News respond? Well, Tucker Carlson said

“He looked at the sun without any glasses. Perhaps the most impressive thing any president has done.”

I can think of at least a dozen things other presidents have done that are significantly more impressive than ignoring scientists and burning their retinas. But the Fox News people want what they want I guess. I suppose they want their hands held and or to be receiving high fives as they literally walk to their doom. Maybe he took it as a dare? If so, here are some dares I throw out to 45:

Finally I leave you with this gem from Twitter – Madeleine Albright threw the following shade:

Enjoyed watching #Eclipse2017. A great reminder that all darkness is temporary. pic.twitter.com/NlK5wTaCtr