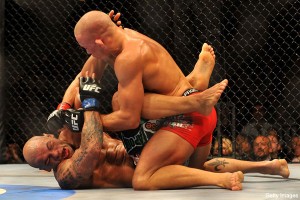 This dude crushed some fool

UFC 100 was this past weekend and was billed in many circles as potentially one of the biggest shows in UFC history. It got tons of attention, probably more than most UFC shows. ESPN was all over this one, and that happens for like 2 UFC shows a year. Two Title fights on the card, so, yeah.

I think the only way of describing the end result is a bit of a let down. It started out solid, but the Championship fights just weren’t enough for me. This analysis is going to be kind of weak running into the final point, so, if you want much better UFC 100 analysis, here is a blog I recommend, nothing up as of this writing, but I like that place for UFC stuff.

In terms of the two Title fights…both were dominant by the Champions. Georges St-Pierre defeated Thiago Alves for GSPs belt. St-Pierre dominated this thing. It went 25 minutes, 5 rounds of 5 minutes, and simply didn’t bring much to the table in terms of competitive drama. Marveling at how good St-Pierre is only gets you so far.

The other Title fight saw two heavyweights slowly get out of 1 five minute round and ended in the 2nd. It was one guy lying on top of the other for most of this thing.

The two non-Main Event fights were better, however.

In the first bout of the evening Yoshihiro Akiyama fought Alan Belcher. This was the fight of the night on the main card for sure. Three solid rounds of action that ended in a controversial decision. Akiyama won, but many thought Belcher deserved a better result. Akiyama was better in this thing, in my mind, but Belcher had the more spectacular strikes, so he had the crowd on his side.

Then, Michael Bisping fought Dan Henderson. Henderson knocked Bisping the fuck out with an impressive right in this one. Here’s where some people might turn away from UFC, however: Once Bisping was down from the punch, Henderson dove in and dropped like a forearm punch on a dude that was not moving.

The show was solid up to this point, the Title matches just did not deliver. It’s not St-Pierre’s fault, they needed to get him a better opponent for a show this big. What to make of UFC moving forward? Everyone is going to talk your ear off about the next biggest sport in America, and this is all well and good, it’s right. It’s just that it would seem like UFC has a ceiling: where boxing once was.

You can only go so far on PPV buys, this was their biggest PPV to date, from here, if they want to be perceived as a major sport and ahead of what boxing once was, it would be a matter of becoming financially successful on regular television.

That’s still a long way off, but other MMA promotions laid the ground work for it last year. Elite XC was an awful promotion that was a rival to UFC. They failed because their fights were lackluster and not the caliber of what UFC could bring, but they were on primetime on CBS, which would be a huge position for UFC.

No matter what, they’ve done a great job of building a company, they still need to transition more to turn their fanbase into sports fans rather than just fight fans. But, if that’s what they want, I’m not going to doubt their ability to get there.