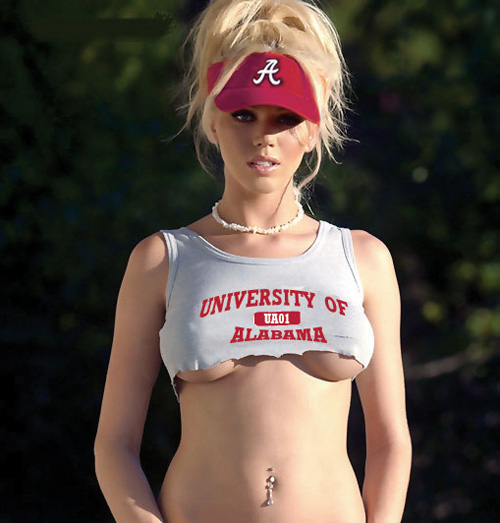 Due to budget cuts, Alabama was forced to skimipify their cheerleader outfits.

Capping off College Football’s season opening slate is the marquee matchup of #5 Alabama and #7 Virginia Tech. Not gonna throw out a prediction on score or winner, but will predict this: Alabama struggles with a passing offense and Virginia Tech blocks a kick.

Also tonight sees #20 Brigham Young take on #3 Oklahoma. Sam Bradford will throw for tons of touchdowns for Oklahoma, so hopefully whoever is quarterbackin’ for BYU channels a little Ty Detmer (Yes, Ty, fuck Steve Young, I said it) and can turn this one into an entertaining shootout.

And, if you still want more college football, at like 11pm Washington and LSU play in what could be a sleeper of an entertaining game. LSU comes in thought to be the much better team, but, Washington is still a major conference team hosting a team from an entirely different part of the country, which tends to keep games closer than they should be.