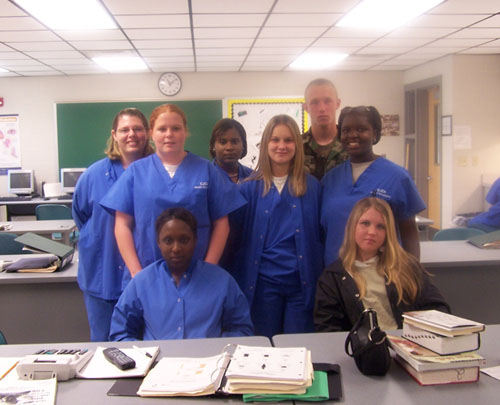 The Army Guy and the Girl With No Blue Outfit didn't feel right about being in the picture.

COLUMBIA, Mo. – Gadgets such as the Apple iPhone and the iPod Touch are mainstays on college campuses — largely for the devices’ ability to help students escape the pressures of the classroom.

Now the oldest U.S. journalism school is asking students to buy those or similar devices to download classroom lectures or confirm facts on the Web while reporting from the scene of a plane crash or town council meeting.

Soooo – the school figures that the future of journalism is giving people people iPhones so they can ‘fact check’ on the Internet?  Let’s spin this out.  You decide to go to the University of Missouri School of Journalism.  You have to buy an iPhone.  I guess that means you have to but the service plan, too.  I guess you could get a Blackberry or something but whatever fuck them.

They said:  “confirm facts on the Web while reporting from the scene of a plane crash or town council meeting”.  I don’t have time to use both examples so let’s just assume that Timmy the Sophomore is on the scene when a plane crashes into a town council meeting.  What is he going to do with an iPhone?  Look on Wikipedia?  Check Orbitz to find out what flight it was?  They won’t find out anything.  At best, they will find out something wrong.

You can go on Wikipedia and just change things.  You can make a website about anything.  Why just the other day I myself made a website about something and I guarantee you it was all lies made to look like the truth.  And now we will have a bunch of doofuses battering their poor little cell phones trying to find out things happening on the Internet while standing at the very place that the actual NEWS IS OCCURING.

To recap – journalism students are being trained to use the Internet to check facts while they are covering the news.  And since they will have iPhones, they can take a picture of the news event, put it on twitter, then add in a bunch of background that may or may not be true and boom!  They have the scoop.  Except, they could do that now.  Shit.  I could do that now.  I could probably go push a kid into an end cap at Wal-Mart and take a picture of him.  Unknown Jerk Pushes Kid at Wal-Mart, my headline would read.  Thanks for the Pulitzer, suckers.