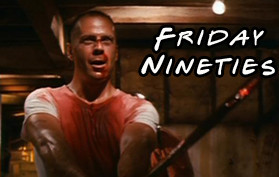 “I’m sorry baby, I had to crash that Honda.” is, IMO, the best line in the movie because Butch makes it sound like something that happens all the time and Fabienne is just like….ok.

No sense trying to deny the greatness of Pulp Fiction.  And I fondly remember playing the CD of the soundtrack in my old apartment in Portland.  My roommate and I used to eat out of the pots and pans we had most of the time because all we could cook was soup and by cook I mean heat up from a can and we used the pots because the dishes were dirty so we couldn’t microwave anything.

And I distinctly remember deciding one Saturday that I was going to clean the kitchen and I did and the whole time I played the Pulp Fiction soundtrack.  And I also remember skipping this song whenever it came up because I thought it sucked.  Don’t remember why I thought that.  I just listened to it again and it seems fine.  Maybe I was prejudiced because I am pretty sure it is the only song that was recorded just for the album, with the rest being oldies?  Not that I was a huge fan of the surfer music.  There is really nothing you can do to that but envision yourself doing something cooler than you would ever be able to do in real life with that playing in the background.

I still do that, actually.

But as for Girl, You’ll be a Woman, Soon I will let you judge it for yourself but to me it feels like the national anthem of perverts or the song little Jewish girls listen to just before their Bat Mitzvah’s.