Use Wasp Spray Instead of Pepper Spray? According to this email we got, ladies should be using wasp spray instead of pepper spray to ward off menacing thugs (and presumably wasps):

Good idea… If you’ve ever used wasp spray for wasps, you’ll know that it shoots at least up to twenty feet. Guys, tell your women.

I have a friend who is a receptionist in a church in a high risk area who was concerned about someone coming into the office on Monday to rob them when they were counting the offering. She asked the local police department about using pepper spray and they recommended to her that she get a can of wasp 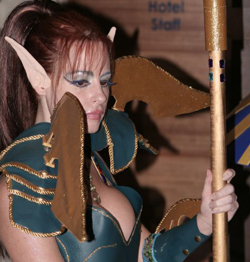 Elf Girl is not concerned about being attacked by humans.

spray instead. The wasp spray, they told her, can shoot up to twenty feet away and is a lot more accurate, while with the pepper spray they have to get too close to you and could overpower you. The wasp spray temporarily blinds an attacker until they get to the hospital for an antidote. She keeps a can on her desk in the office and it doesn’t attract attention from people like a can of pepper spray would. She also keeps one nearby at home for home protection. Thought this was interesting and might be of use.

Now, I am no expert in the ways of personal defense, but anytime that an email starts out with “Guys, tell your women.” I figure it must be important.  So I would strongly reccomend carrying around a big ass can of wasp spray with you whereever you go.  Here’s a few reasons not mentioned in the email: