History Channel's Vikings – You Need To Watch This Show 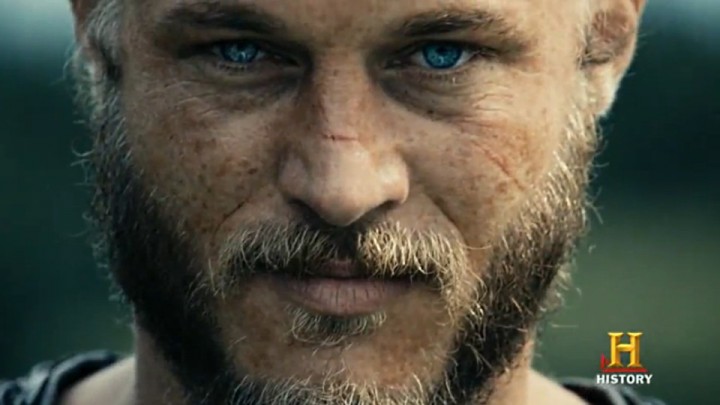 Hello, reader. Do you like to watch people kicking ass and taking names? Seeing baddies get their comeuppance? How about women taking what’s theirs in a man’s world? Do you hate English people and want to see them slaughtered enjoy historical fiction? Then you need to be watching Vikings. Now please, I hope you will realize that I am not super concerned with historical accuracy here but I did learn one small fact which is that the helmets with horns on them thing is apparently not a real Viking thing at all. And there is a distinct lack of horn helmets in this series, for which I give them credit (by the way, it is loosely based on the history of Ragnar Lodbrok who may or may not have been an actual historical figure).

Now, I don’t want to give away big spoilers because if you haven’t watched it I don’t believe in ruining things for you. But I do need to give you some tidbits to entice you. And finally, below, enjoy a photo gallery including extreme hotness in case that is the best motivator.

There is a lot of scheming, plotting, double-crossing and double-double-crossing. The brief summary is Ragnar wants to sail West to pillage but the general theory among his people is that there is no land to the west and they should just stick with the boring old east. But that is not enough for Ragnar, he wants to go find the unsuspecting English folks (for starters) and take all their crap. Now you might think it’s hard to root for a guy like this but somehow I find it easy. I guess I’ll give the writers and actors credit for that. When I’m sitting on the couch rooting for pillaging and burning of villages and towns, they are doing something right. I think it might have something to do with the inherent kind of “fairness” presented in Ragnar’s village and people. Although I recognize this might be made up, it works. Basically if you can kick ass you are given respect, whether you are a pretty lady or not. And if you aren’t a lady who is literally kicking ass yourself then your various men will literally remove the skin and organs from other men in order to punish them if they harm, scare, or even inconvenience you.

So in summary: axes, hotness, gleeful killing, ladies kicking ass. Check out the pictures below to start catching up in preparation for next season! 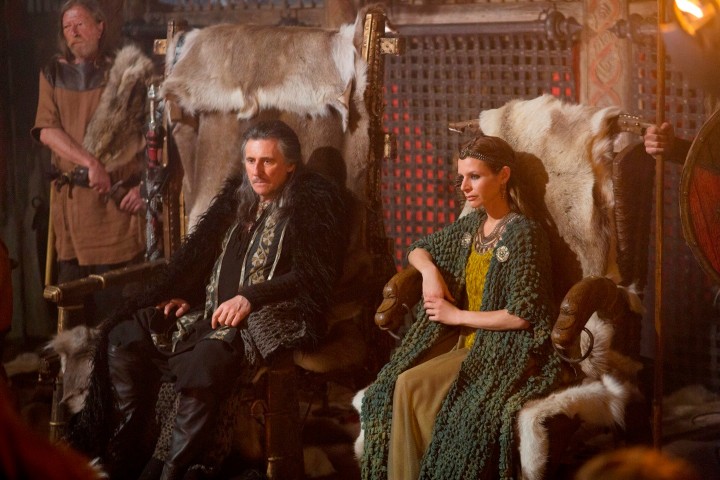 Earl Haraldson (Gabriel Byrne) and wife Siggy (Jessalyn Gilsig). You may recognize Siggy from effing Glee which I object to on principal. I recognize her as Claire (Hayden Panettiere)’s biological mom on Heroes, where she could control fire. Pretty cool. I bet Siggy wishes she could control fire. If so, a lot of people would be burned to a crisp on this show. She goes from being pretty much the head lady to having to kind of suck up to others a lot for the rest of the show so far and I think she does a really good job of defining her character.” 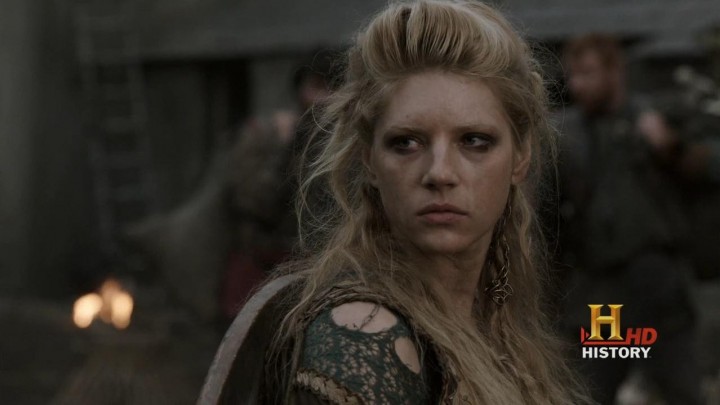 Lagertha (Katheryn Winnick). She is shooting daggers with her eyes in this photo. Which is better for whomever is getting the daggers than if she had an actual dagger, sword, or axe in her hand, in which case they would already be dead. Lagertha is a shieldmaiden which means she’s a woman who goes into battle alongside the men and kills lots of folks in a brutal manner. She has a memorable fight scene with her own brother-in-law, Rollo, to name just one. This lady does not let men push her around. 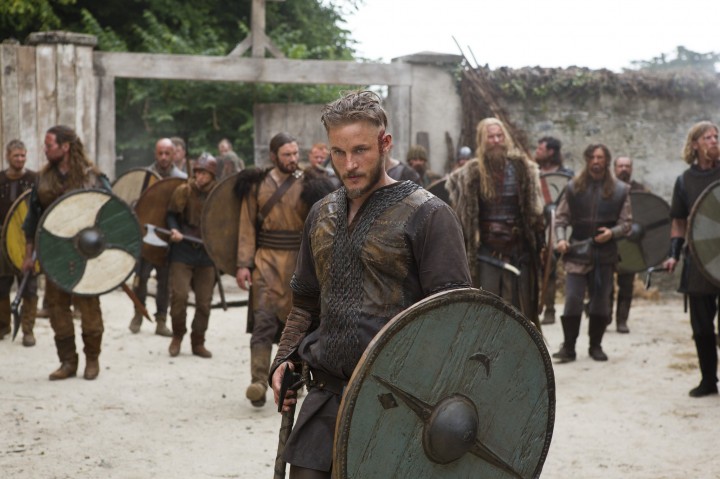 Ragnar (Travis Fimmel) says many things with his eyes. I think you know what I mean. But one of the things is, “I will kill you dead if you mess with me, my family, or my people.” 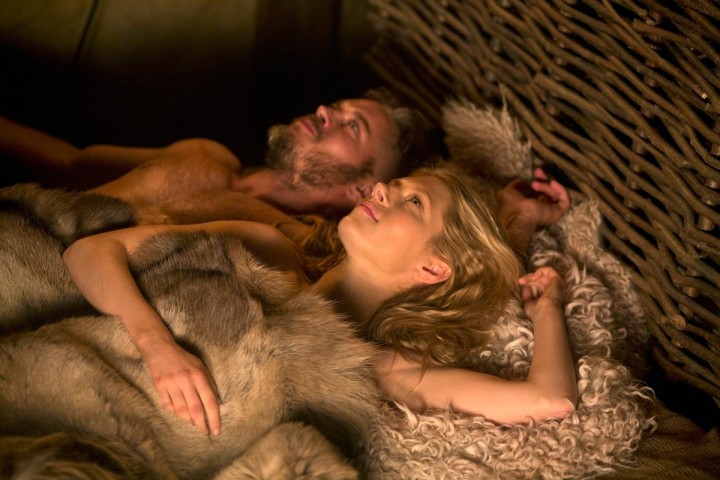 Ragnar and Lagertha. These two make quite a team, kicking ass together. She doesn’t take any crap from him, he doesn’t really try very hard to give her any. 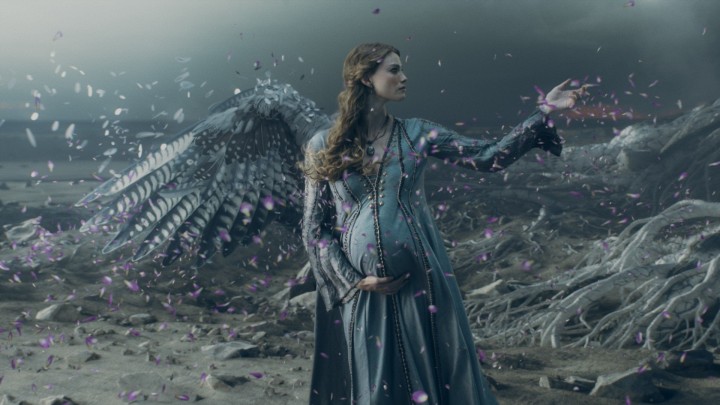 Princess Aslaug (Alyssa Sutherland). Hmmm, she is a tricky one. At first introduction I pretty much hated her. But by the end of Season 2 I was a fairly serious fan. She is no joking about protecting her family, and she has a nice girl power thing going on where she bonds with ladies even when she has a rivalry with them. She is not a warrior but I feel like she is going to kick some ass somehow anyway. I mean, she is a Viking. 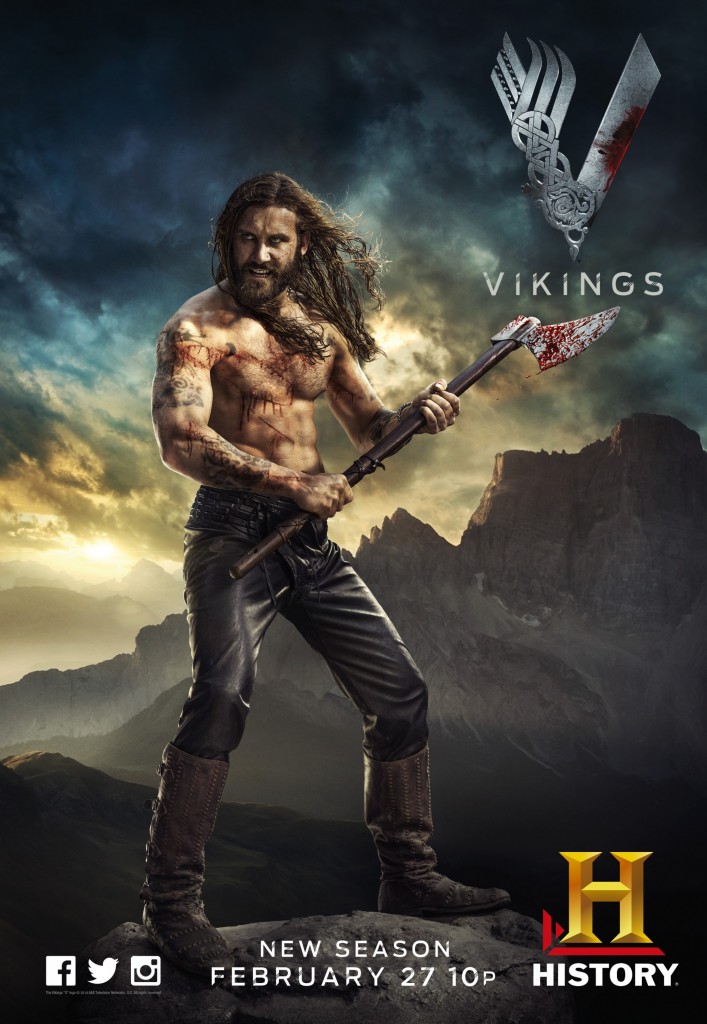 Rollo (Clive Standen) is an enigma. Does he love Ragnar, does he hate him? Is he a good guy, a bad guy? He has some really bad moments for sure. But he may have redeemed himself. In any case, any time he wants to take off his shirt and run around like this, I’m cool with it. I’m just sayin’.

And here are a few more tidbits: