The Walking Dead: Life After Negan 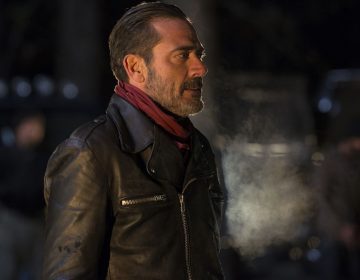 Obviously this is full of spoilers. So, like, don’t read it if you are planning to watch the show and you haven’t yet. Because I will spoil it for you. With spoilers. Get it? OK. Cool.

I’m going to throw up a quick synopsis of each of the first three episodes so far this season because I’m wicked behind doing this and I want to catch up and keep up. So hang on for the ride. Another may be coming later today.

Episode 1: We finally see whose head Negan bashed in

But of course, they make us wait, right? They show us Rick, and they show us Negan dragging him off in the RV, and we don’t know who Negan killed.

Now I’m a comic reader so I’m going to compare the show to the comic once it gets to that point, I’ll try not to spoil anything super important as far as details in the comics in case you are a watcher and you want to read those too. But I can’t really completely discuss the show without taking my knowledge of the comics into account. But I won’t spoil the show with future comic knowledge.

So this bit, this whole episode almost, doesn’t happen in the comic. Yes, he kills someone, but he doesn’t then take Rick on this ride to teach him an additional lesson and torture him/break him some more. Of course I had my theories about who they would kill on the show, given that it already has some serious departures from the comic. When they started showing Rick flashing back to each of the people who was there with him I thought OK, maybe if they show a person it means they’re not dead. Or maybe he’ll think of the dead person last? But then they showed every single person without any hint of Rick thinking about one differently from another so that theory was blown.

I found much of this episode frustrating because I just wanted to get to the answer, since I’d already waited all summer to know what happened. But I do think it served the purpose of really giving everyone a heads up about how terrible Negan is. Now I’m already aware of this, I’ve been anticipating his entrance into the show for a long time. I’m aware of how terrible and disturbing he is, and how gleeful he is about it. So maybe that point needed to be brought home for people who aren’t reading the comic.

Anyway, when we finally see who gets killed, it sort of makes sense. First, Abraham, who I truly didn’t like all that much, sorry Abraham, though I do like the actor. But at this point in the comic he is already dead from a different cause, so it makes sense to get rid of him here. I was relieved it wasn’t Darryl, who I predictably love, because Darryl doesn’t even exist as a character in the comic, so I never know how/if they are going to resolve that. 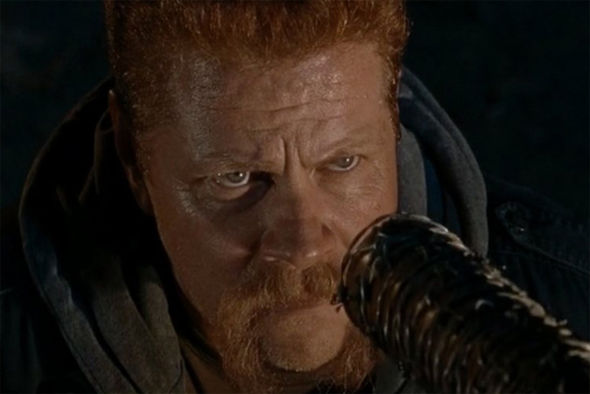 Sorry Abraham, at least you told him to suck your nuts.

However, then, again driving home the point that Negan is terrible, he can see how upset Rosita is, and he taunts her, at which point Darryl, ever the softie under his gruff exterior, leaps to his feet and attacks Negan. Because of course he does. Leading to…….. what I was expecting all along, the goodbye of Glenn. I will save you any gore here because the show was gory enough. Here is a page from that issue of the comic: 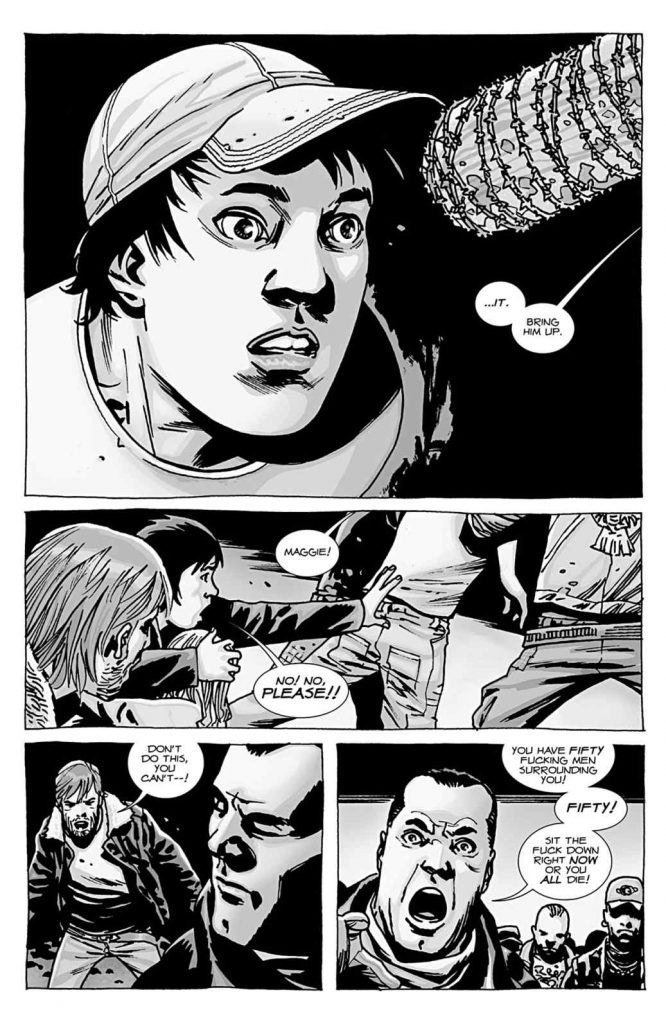 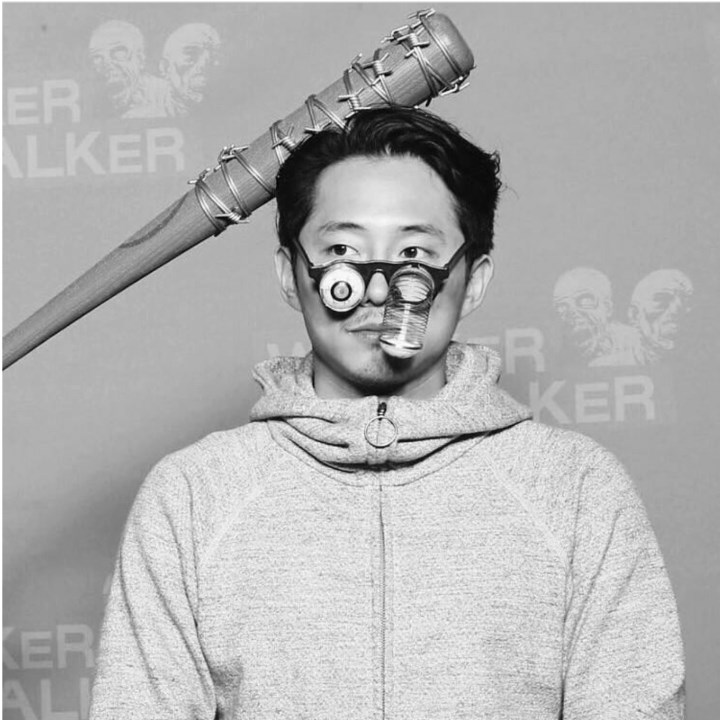 Where the comic and the show differ even more, besides the show killing two people instead of one, is that in the comic, Rick isn’t as broken by this even at is he is here. The show is obviously taking a departure here. In some ways, the comic Rick is always a little meaner and more bada$$ than the Rick on TV. Is he horrified and crushed by Glenn’s death? Yes, of course, but he’s immediately planning how to destroy Negan, not agreeing to go along with him. It seems like maybe the attempt to have Rick cut off Carl’s hand was an additional means of really breaking our TV Rick down until he offers no resistance to Negan anymore. And he certainly appears broken. It remains to be seen if that was just in the moment or if he’s willing to go along with this nonsense. I hope the previews are misleading.

As is often the case, too, Carl seems pretty level-headed and willing to do what needs to be done here, telling his dad “Dad, just do it.” 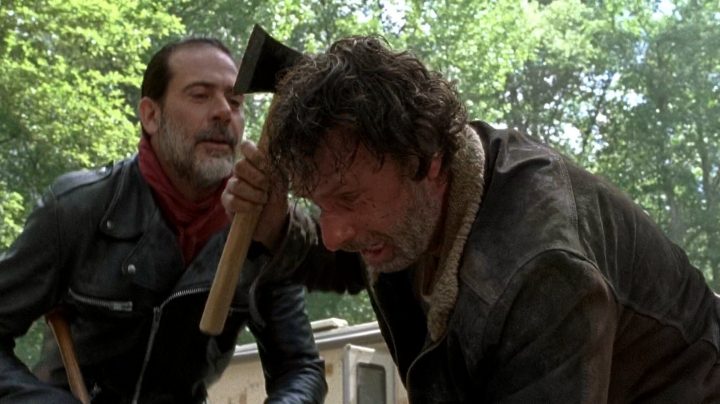 Of course, just like a benevolent old testament God, Negan doesn’t make Rick go through with it.

I know this is horrifying and Rick has lost it at this point, but I need him to get right back to here real quick: 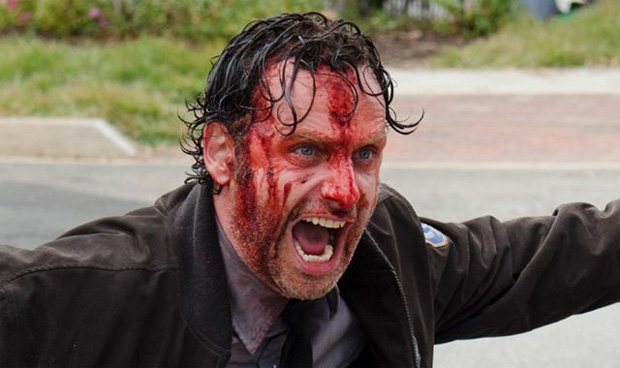 This is the Rick your people need, sir. This one. The one who kills someone as a greeting and then basically says “Come at me, bro.”

I can see how this episode would be tough to take for anybody who wasn’t expecting this brutality, but once I got over the shock and sadness of this issue of the comic, literally years ago now, I have been kind of looking forward to this point in the show, because Negan is someone who it’s just so fun to hate. And I admit I was looking forward to everyone else’s reactions. Sorry (not sorry).

I did like that they wrapped up the episode by showing how much everyone in the group still cares about each other and the two moments that killed me the most were Rick’s “flash ahead” to a time where they were all sitting at a dinner table together including Glenn with his and Maggie’s kid on his lap, and when Rick tells Maggie they’re not letting her go anywhere alone and reminds her Glenn “was our family too”. Sniff.

What did you think? A lot of people have said they’ll quit watching the show after that season opener but I implore you to stick around. It’s definitely worth it. I mean if you’re caught up, you kind of already know what I mean, right?

Teaser for next episode/post – Ezekial.