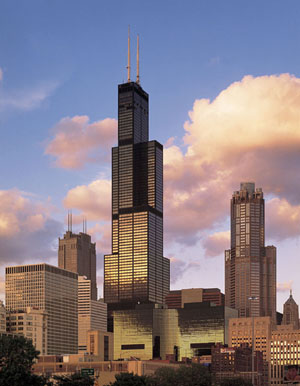 My name is SEARS Tower, bitch.

I just read about the clear ledges the Sears Tower in Chicago opened to the public Thursday.  It sounds really cool but I wonder how many people without a fear of heights suddenly discover one when they go to step out?  I never thought I had one (I used to be the one to go up in the bosun’s chair when shit went hinky up on the mast) but I had a moment’s pause last week when I was on a platform, 45 feet up a tree trunk.  I was strapped up as tightly as one of Scarlett O’Hara’s corsets but it was still a bit intimidating to step off into nothing.  And this ledge won’t have any visible means of support.  I can see more than a few people having little breakdowns over this.

The article touts, “The balconies can hold five tons, and the glass is an inch-and-a-half thick.”  And the Titantic was unsinkable.  The worst part of the article is buried at the bottom, where they so casually announce they are changing the name of the Sears Tower to Willis Tower.  Umm.  No.  It is the motherfucking SEARS Tower.  That is its name.  You can’t change the name of the Empire State Building or the Golden Gate Bridge.  You don’t randomly decide to change your kid’s name on his 10th birthday.  The prunes to dried plums thing made sense.  But other than that, once something is named, that is its name.  For fuck’s sake.