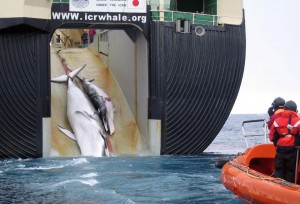 Whales in their natural habitat using a slip 'n slide.

Have you seen this Whale Wars TV show on Animal Planet? Second season premiered on Sunday after something like a 7 episode season 1 a few months back. I don’t watch any Animal Planet, but I was drawn to this show.

Main reason: These people trying to stop the Japanese from whaling are absolutely crazy. I’m not talking partial crazy like everyone has and Animal Planet is just showing most of their crazy. No, they are legit crazy.

Here’s some of what they did last season: started by tossing some butryic acid and stink bombs on the Japanese ships, had people board a Japanese whaling ship and faked their captain getting shot.

Now, back for a second season it seems like they are going to try to RAM the Japanese whaling ship at some point.

The group, called Sea Shepards, apparently broke from Greenpeace because Greenpeace were a bunch of pussies who wouldn’t take the fight to the Japanese with full force. They also don’t have a clue what they are doing when it comes to running ships, apparently.

The best thing about the show is that apparently what the Japanese are doing is legal. The Japanese are collecting whales, killing them and conducting scientific research. When the ban on killing whales was established in the 1980s, there was a set aside number for countries to kill and the Japanese are still within that.

On top of that, it seems like the whale population is growing. In the 1980s, this looks like it probably was a huge problem. But, it also looks to have been solved, near as I can tell. It’s not like with sharks currently where most populations are dying off.

The overblown nature of the whale controversy just makes this situation so much more entertaining. The people on the Sea Shepards boat keep saying stuff like, “if we take out that boat the Japanese whaling will be stopped for the year.” I really hope that means that their desire is to sink the ship.

I’m definitely in for the rest of the season and looking forward to seeing them attempt to ram a Japanese ship.