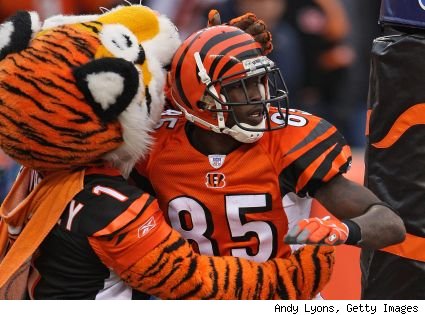 Yahoo may not be the best entity for sports news. For the most part, they cover the USC Trojans basketball and football programs and have been adamant about uncovering scandals within that athletic department. So, they’ve been trying, but haven’t gotten too far.

This, however, is not a whole hell of a lot of effort.

Following in the footsteps of renowned role models Mike Tyson and Stephon Marbury, the former Chad Johnson(notes) has gone and gotten himself a face tattoo. The transformation from amusing narcissist to attention-craving crackpot is now complete.

Ochocinco announced the new facial ink on Twitter and had the courtesy to post pictures of his three-part facial masterpiece.

The entire twitt world and media outlets got punked, that was my twitt joke from yesterday, they follow I’ll have fun with it.

My grandma would kill me if I had damn facial tatts!!! Fun while it lasted, back to normal, I felt different to.

Chad Johnson’s Twitter page is amazing, by the way.