What the hell is wrong with the Cubs? 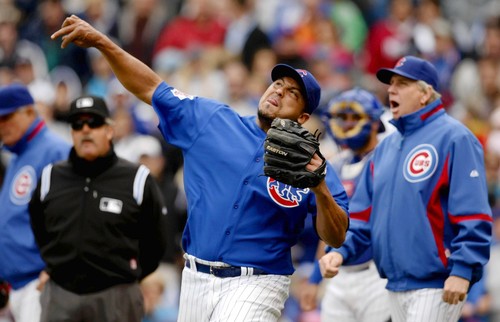 This would be Big Z tossing a ball into left field. Because he was pissed at the ump, not because, you know, it was any part of a play.

The Cubs came into the season as favorites in the National League. They sit coming into today at 23-23 and like middle of the pack in their Division.

Things have not gone smoothly for the Cubs. Things might have hit rock bottom this week when Carlos Zambrano was ejected and then proceeded to: eject the umpire, toss a ball into left field, beat the crap out of a Gatorade machine with a baseball bat.

It was not the best meltdown, but, it was fairly entertaining.

Their biggest problem? Can’t hit and injuries. Derrek Lee has been fairly injured most of the season and slumped the rest of it. Aramis Ramirez has been injured. Milton Bradley has been a disappointment and blamed it on the umps, as we covered this week.

So, what do you think: can the Cubs bounce back and become the top team in the NL this year, as was expected?