What Would Jesus … Drink? 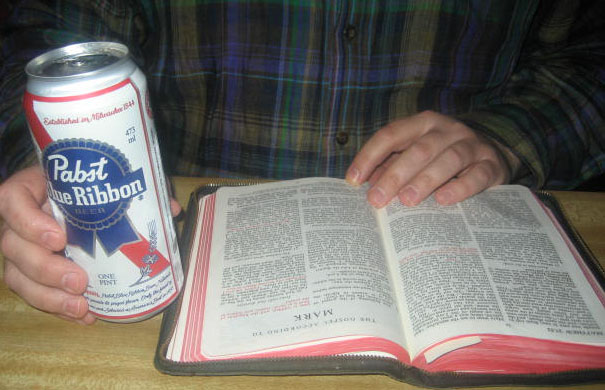 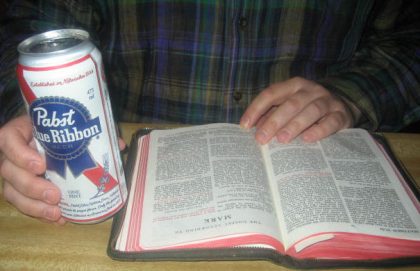 So is that PBR a sacrament? Better look it up.

The invention of bread and beer is arguably responsible for humanity’s ability to develop technology and build civilization. That’s way older than the bible, fifth millennium BC! In ancient Mesopotamia brewing was female magic. Just think, civilization may have arisen because of the promise of a cold one at the end of the day. It worked for Shamhat who showed wild Enkidu “Those Things Women Know” for seven days and seven nights.

.. he ate until he was full, drank seven pitchers of beer, his heart grew light, his face glowed and he sang out with joy.”

Roman’s preferred wine. It’s being reported that the taste of a craft beer with an authentic taste dating from the time of Jesus explains why. Ancient beer was thick,more goo than liquid. Sumerians invented the straw to prevent the bitter solids left over from fermentation from getting into their mouths.

James Death explained in Beer of the Bible than the manna from heaven that god gave the Israelites was a bread-based, porridge-like beer called wusa

Herzl Brewery in Israel took wheat that Tel Aviv University geneticists says was the strain used for beer in the Holy Land two millennia ago to produce five gallons of “bible beer”.

Jesus of Nazareth, a carpenter, would have eaten simple meals so it’s likely this beer with a hint of honey and berries was on his table. It has a three percent alcohol content and is far too cloudy for the modern market.

You won’t be cracking open a Jesus Beer in church this Sunday though. Itai Gutman and his friends have already drunk the results of their six month experiment and there are no plans to make any more. It pays to own a brewery if you want to drink Jesus Beer.

“We were curious about being able to come up with the first ‘biblical’ beer,” said Gutman, whose award-winning brewery produces five contemporary labels for sale. “It’s really not the kind of flavour that has a market.”

For those of you hipsters who are disappointed not to get a sip of the ultimate craft brew don’t worry. There’s a beer in Oregon that uses yeast from the brewer’s own beard.