What's the scariest amusement park ride you've been on?

I’ve been hearing a lot about the Zumanjaro Drop of Doom. This ride, twice the size of the Statue of Liberty, is the latest attraction at Six Flags Great Adventure theme park in New Jersey, USA. That’s a 415 foot drop at 90 miles an hour. When you watch the video those aren’t screams of joy and I’m willing to bet they have a special attendant just to wipe down wet seats.

While it’s tall and you can see your house from the top of Zumajaro I’ll tell you right now that if you want a real thrill ride go to Canobie Lake Park in Salem New Hampshire and ride the Yankee Cannon Ball. It might only have a 63 foot drop but coaster aficionados come from all over the world to ride one of the last best wooden roller coasters.

A woman was thrown off the top of a similar coaster at Salisbury Beach in 1973 so as kids we were all convinced we were going to die every time those clicking cogs brought us up to the drop of the Yankee Cannonball. It didn’t help that my glasses were confiscated for safekeeping every time I rode it. Not being able to see made it a dark ride in addition to the traditional coaster thrills and the idea that a ride built in 1930 could fly apart at any moment. Seat belts weren’t added till 2003 so it really did feel like you were going to get chunked out on your head. 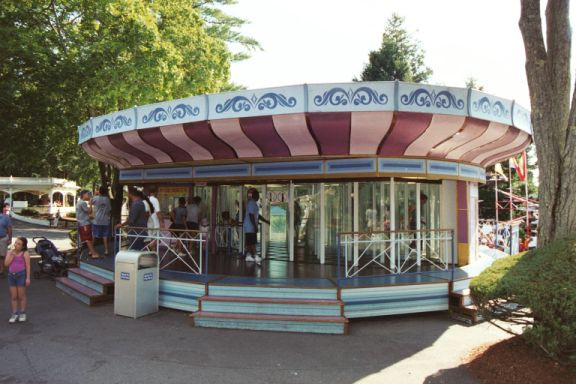 The Crystal Orbiter at Canobie Lake Park. My vote for the scariest ride I’ve ever been on.

The Yankee Cannonball isn’t even the most frightening ride at Canobie Lake. That’s reserved for the Crystal Orbiter.  Now rebranded as the Tiki House the mirror maze no longer rotates but this is part of the reason it’s scary. The machinery that operated the rotating platform just stopped working when the old man who operated the ride died. Claude was a white haired old carnie that wasn’t good for much else. He was also someone straight out of a Ray Bradbury story. His ghost still haunts this ride.

Claude had an instinctive feel for splitting up groups and letting them wander trying to reconnect in the maze. For the older kids he ran it as a kind of spin the bottle game where if you met face to face you had to kiss. My first kiss was a girl from Boston who tasted of bubble gum and cotton candy. It’s only after you get out that the other kids tell you that there’s a ghost of an old carnie inside the maze. No wonder I was scared; ghosts that gave you advice and girls that gave you cooties!

I encountered Claude in the maze once. I’m old enough that the man was probably still alive when I met him but it was still memorable. It must have been obvious that I was getting frustrated at not being able to get out because he came up behind me smiled and simply pointed up. There were arrows painted on the ceiling and ghost or man he’d shared the secret with me. Nobody ever looked up. They’d call that left brain thinking now but it still feels a little like magic to me.