Who let him in here? 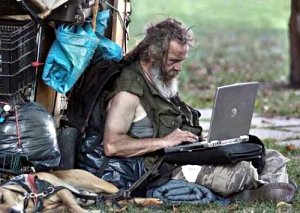 All of the writing staff here at Superficial Gallery are dedicated to their work.

A friend of mine asked recently: “When did you get so disorganized?” I don’t know. If I was organized I’d have made a note of the date and put it in a file that had been carefully labeled with various colored pens. Then I’d do the Sunday Times crossword in ink and pigs would fly. Truth is I remember my own birthday because it’s on a major holiday. If you weren’t born on Christmas or not on that select list of women who are inclined to get naked with me on their birthday I’m likely to forget yours too.

Anyway Cornmeal recently reminded me we’ve been writing here at Superficial Gallery for a year now. I suspect he’s one of those organized guys with colored pens and a file cabinet. He’s also funny and one of the best things about coming here. Superficial Gallery is like Playboy: You check out the cute girls, see what funny stuff has been posted, make sure you’re updated on TV and the Southern Fried Vampires then if you have time you read the articles. I’m the guy who writes those. Sometimes people actually read them. I write some movie reviews too. Nobody reads those which means eventually I’ll be a top rated critic and on Rotten Tomatoes telling the world what movies to watch. It won’t change much, the press pass Acadia gave me will still be drawn in green crayon.

What are the highlights of an entire years worth of me at SG? Whenever Acadia complains about me he mentions cranberries. Paddy’s mother in

law loved my piece on cranberries and Acadia should be thanking me that SG is now the go to site for cranberry lore but he still says “Cranberries” in an editorial tone of voice. Where else are you going to learn that 1959 was the year that the only legal monopoly in the United States was caught putting the herbicide aminotriazole on their cranberries? Yes Virginia it was a year without cranberry sauce and furthermore if you weren’t Pilgrim management you got stuck eating fish at the first Thanksgiving. Hey I wrote about fishsticks too. With me you could find yourself reading about what the Queen has on her I-Pod one day and real sex dolls for dogs the next. Amazingly enough there’s been only one attempt at censorship and that was from an outside agitator.

The most infamous piece has to be the one about these people that are getting the whites of their eyes tattooed. I wrote it and even I won’t click on the link. The most fun to write was Euphemistically Speaking it’s NSFW. Since I listed the various literary euphemisms for “lady parts” technically it was safe for work. I liked the bar bet one too. Where else are you going to learn to impress the opposite sex with little napkin roses but here at SG? I got the urge to draw one day and now everyone thinks I have talent because I turned Acadia and Vange into superheroes. The Internet Use Pyramid is usually the speed of my graphic skills. A lot of people didn’t get it but since I still hold out hope for getting a cartoon in the New Yorker that didn’t bother me at all.

The piece I’m most satisfied with was Superficial Movies – Moments of Fear. It’s about the moments of cinema that are really genuinely frightening not just a monster hopping out of a tree with an axe. The one that verged on being an actual news story was the one about how many porn stars may have reinvented their lives after fake suicides. That one also got the weirdest private mail. Someone told me that they’d gotten a bra that fit for the first time after the article I wrote about breasts. I think that was a compliment. I almost got a job from The Seat is Up and I learned something new myself when I wrote Built for Murder. If there were two I wished more people would have read it would have to the Enchanted Dolls and More Human Than Human because both are about eerily beautiful art.  Decide for yourself, go check out my author archive. Better yet go check out Cornmeal again. I laugh every time he posts something.

Thanks for reading me, even the posts that make no sense at all.  Si li crachait en mi le vis Et escopi par grant vertu