Who Ya Got: Entourage vs. Seth Rogen 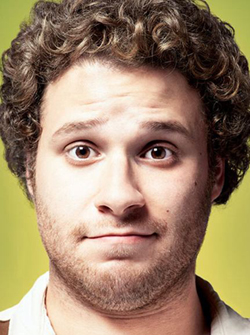 No, according to the guys of HBO’s “Entourage” — and especially not in the case of Seth Rogen. Turtle (Jerry Ferarra) and Drama (Kevin Dillon) dismissed Rogen and Heigl’s fictional relationship, insisting that real life is not that generous to less attractive people. (Turtle’s relationship with hottie Jamie-Lynn Sigler is explained by the fact that she finds him to be “cute.”) The argument wasn’t exactly mind-blowing, but the script did manage to get under Seth Rogen’s skin with some digs about his looks:

Turtle: His ugliness is oddly fascinating. Especially in Blu-ray. It just pisses me off.

Drama: Why would you be pissed off? I’m the one who was too good-looking to even get an audition for the role.

Could have sworn that would just be a joke but, uh…hey, defend yourself Seth Rogen.

“Yeah, those guys are a–holes,” Rogen told E!’s “Daily Ten.” “I actually ran into Matt … Kevin Dillon in a Starbucks. And he’s like, ‘You know, I’ve got to kind of apologize because apparently the guy who created our show doesn’t like you so much.’ And I said, ‘Well, I have reason to believe because I think [showrunner] Doug Ellin is a moron from all I can understand, so it makes sense he doesn’t like me.’ And I’ve kind of said some disparaging things about the show. Although in our defense, [producer] Mark Wahlberg called us misogynistic in an interview, so I think they kind of started that. It’s on. Luckily, I never have and never plan on watching ‘Entourage.'”

I don’t think I can look at Seth Rogen the same again. I mean, I figured he was a funny dude. But, he gets put on the spot here and then drops two of the LAMEST insults you can muster up. He first hit Kevin Dillon with the funnier/more famous brother line and then the “I DON’T WATCH IT ANYWAY SO HA.”

Turns out dude is bitter he pitched a similar idea to HBO and they didn’t roll with it.