To the commenter last week who said that her kid got scared because of Dontae getting burned up:  This is now a super recap featuring friendly “this is all pretend” disclaimers at the beginning.  So don’t worry, “Bittles”.  I will explain what happened in the show without it being scary.  Because it is pretend.  And truthfully, not great pretending either.  Whole thing sort of baffles me to be honest.  ANYWAY!  HERE WE GO!

This week’s episode of Whodunnit? featured the “death” of Adrianna.  She got blown out of a golf cart into a tree.  And the point of the eppy wasn’t really that.  It was more about the total lack of teamwork on the part of 75% of the people in the house.  Here’s how it breaks down:  there are four people on the “pretty” team.  Nobody likes them and they are sort of jerks.  And then there are a million other people who were trying to team up against them.

But they are so dumb/slow/distrustful that team jerk all got saved and team everyone else had two of there people put in the “Scared” round.

Seems to me that the only way to play this game is to outright make a team and say it is a team and not help anyone else.  Makes no sense to do it any other way.  They have to split up and hit each of the three places they can go (crime scene, morgue, last known whereabouts).  Then Giles the butler reads them a a clue so they need to run around following the clues to piece all the things together.  So here is what you need for a team:

The first four things are pretty self-explanatory.  The fifth one, though is what is killing the people in the show.  The ones that are in the bottom two most of the time now are the older, slower contestants.  They aren’t running around very well and their younger faster teammates are not helping them at all.  So in three weeks we had Old Don and Dontae (Dontae died), Old Dana and Old Adrianna (Old Adrianna died) and this week it is Old Dana and Old Don again.  They couldn’t run and the ageist other contestants didn’t hook them up with the clues at the end.

So my dream team now is Geno the “Bar Trivia Host” and….actually, I don’t care who else.  I just want him to win.  Or to be the killer.  One or the other.  I’m flexible.  Oh, and if you want to see who gets killed AND HOW then it is after the jump!  Good show.  Not a great show but a good show. 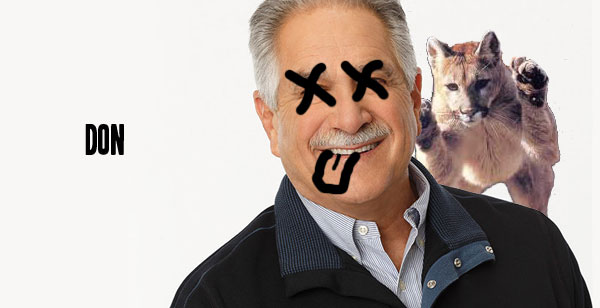 No joke.  He got killed by a mountain lion that the killer let in through a secret panel in the kitchen.  This house is DANGEROUS!