Why Didn't Someone Think of this Before? 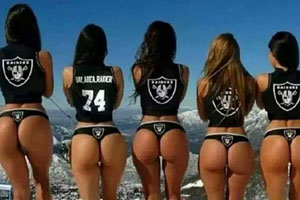 So apparently the well-traveled Oakland Raiders are now thinking about moving to Las Vegas.  Sort of feels like they should have been there all along.  They are the rootinest,  tootinest, meanest, cheatiest team in the league and they LOVE being that.  And their main strategy for years was:  just hire people who run wicked fast and we will teach them how to catch!  It is sort of beautiful that they would move to a town known for sin.

Then again, Las Vegas has worked very hard to ruin itself and make the whole place family friendly.  As a side note to families:  why do you have to wreck everything?  Why can’t you just go to Disney and have birthday parties at Burger King?  Why does every business have to start telling everyone it is “family friendly” so you drag your dumb kids there and get in my way.  Stay out of Vegas!

But since the odds that Vegas is going to change back to the way it was (heh, odds, see what I did there?) I guess the biggest impediment to the Raiders moving there is that they will ruin the reputation of the city.  Ain’t that a kick in the head?  I put together a gallery of some sweet Raiders fans for your horror and enjoyment.  It is like ICP went to a game once and said: let’s do THAT but without shoulder pads!

Seriously, though.  Move the Raiders to Vegas.  I am pretty sure the majority of the fans will just move with the team.  And home field advantage would be sick.  Hard to win a game if you are all broke, hung over and have chlamydia.  Take that, visiting team!