Why I didn’t wash my hands after I peed yesterday. 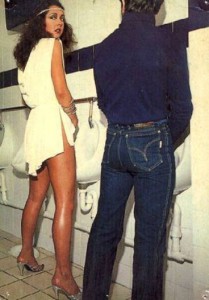 I rarely relate any personal experiences on this site because frankly I could not deal with you all clamoring to know more about my action-packed life.  But I feel like I need to in this instance because rarely has something affected me so deeply.  Allow me to set the scene…

The bathroom on the first floor of my building (where my office is) is the ‘crappy’ bathroom.  I say this because on the few occasions I’ve had to visit the second floor version, it was like being in the VIP room.  Unfortunately, the time it would take to go all the way to the other side of the building just to pretend like I’m taking a leak in a fancy sheik’s palace is not usually worth it.  Or at least it wasn’t until today.  Today everything changed.

See, when I pee I pretty much always have to wash my hands.  I say pretty much always cause I’m not going to pretend it is every time.  Be realistic.  I used to dig graves, so when I went to take a leak with my hands covered in grave dirt, my hands were MUCH dirtier than my relatively protected junk.  I didn’t wash my dick when I was done, so using the principle of reverse-grossness, you don’t always have to wash your hands.

That said, I tend to pee on my hands a lot and that just won’t fly when I get back to the office (they have those CSI lights) so I am generally a pretty diligent scrubber.  But not on Monday.  Oh no.  Not Monday.

On Monday there was someone else in there with me.  Someone in a stall.  The bathroom has two urinals, two stalls (one handicapped) and three sinks.  One of the urinals is wicked short and I avoid it.  And I try to never go into the handicapped stall cause I get scared that if some person who was actually handicapped showed up and I was in there I would have to come out all contorted like the guy from My Left Foot and hope  I get away with it.

But the person was in the handicapped stall.  I say person cause I didn’t wait around to see if it was man or woman or were-horse.  Why?  I’ll tell you why.  After the jump.

The person was having some trouble.  While I was taking my leisurely, coffee-filled pee I heard him flush the toilet like, 4 times.  That’s never good.  Unless he was getting rid of like 3 pounds of coke, there was something in that toilet that came out of him that just wouldn’t die.

Meanwhile, I was pretty much done peeing and realized I was just standing there listening to this dude flush the toilet over and over.  It wasn’t a courtesy flush as far as I know.  Seemed like something more sinister.  But then I heard terrible sounds.

Sound one: a LOT of toilet paper being dispensed.  Like, enough to stuff a pillow, or to really fuck up Dean Wormer’s house.  Rumble rumble rumble went the dispenser.  I was still holding…”Hagrid” when the rumbling stopped.  And I heard something I had never heard before.  Sound Two.

Dude was doing some serious scritching and it became apparent that I did not wanna see what came out of there.  So Hagrid went back to his cabin and I looked at the sink.  No way.  Too far away.  If scritchy came out I would be trapped.  Awkwardly.  I kept picturing someone coming out with a suitcoat and leggings made of toilet paper and some pants he was gonna try to throw away.

I was tempted to lean over and see what kind of shoes were under there but I chickened out and ran down the hall — my pee covered hands spraying droplets of horror all over the hallway.  I’ll never know, now.  I’m glad, actually.  I think that whatever would have come out would have been straight out of Lovecraft.  And when I got back into the office I used the Purell, right after I lovingly caressed the mouthpieces of everyone’s phone…