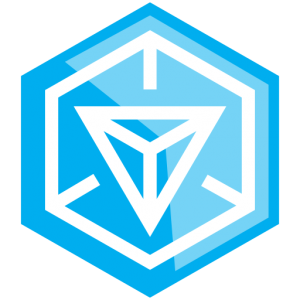 Last week I talked Acadia out of an Ingress activation code. Ingress is a game created by NianticLabs@Google for Android devices. It’s currently in closed beta, meaning it’s closed to the public and anyone lucky enough to get an invite right now is basically testing it out for them. I hadn’t been particularly interested at first, but after a friend of mine had me ride shotgun while he hacked some portals I wanted in pretty badly. Long story short… I’m going to have to pull some overtime to make it up to the boss.
Ingress is a “capture the flag” kind of game with two teams competing for territory. It’s pretty much nerd gang wars. In this case the Enlightened (green team)are battling it out with the Resistance (blue team) for control of portals. The twist is that you have to actually go out and about to the various locations that these portals are located at and be standing at the location to access them. Portals can be fortified, and your ability to do so increases as you level up in the game. Also, the attack power you have access to increases with your level. Pretty standard stuff.
The fact that the targets have to be accessed up close and personal added two elements to the game that were unfamiliar to me though. The first is that you can, and do, run into other players on a regular basis. Within a couple of days of playing I had met others out doing the same thing, and even discussed strategies and was given game advice. Everyone seemed friendly and helpful. The second element is that in the first week alone a ton of miles were driven, a lot of gas was burned, and I walked what seemed like a million miles. Gaming has never left anything but my thumbs sore in the past, so my burning calves were a particularly surprising side effect.  Oh, and talking about blowing up things in front of post offices (where many portals are located) was sketchy at best.
All in all, It’s definitely a fun game. You have to invest some time and effort to make it worthwhile, but that’s the case with a lot of MMO’s. And with New Year’s resolutions breathing down my neck the extra exercise was a nice bonus. I highly recommend you check it out, especially once a shiny clean version is released to the public.