Why Won’t the Useless Ones Die? 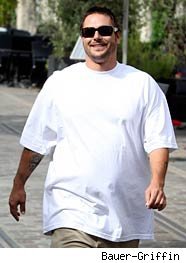 "Fat and happy, you betcha!"

I haven’t been able to sort out K-Fed’s contributions to the world just yet.  He had a couple kids with a couple chicks, married trainwreck Britney, sucked her dry and made her crazy, then took off with a shitload of alimony.  John Hughes and Michael Jackson were both taken too soon* but K-Fed lives on to play Kilzone 2 and eat gas station nachos.

He has put on a freakton of weight and has been approached by some weight loss product about becoming a spokesperson.  They have supposedly offered him 2.5 million dollars.  TWO POINT FIVE MILLION FUHREAKING DOLLARS.

This pisses me off but not nearly so much as when I think of Tim Russert’s early death.  Whoever is in charge of death is doing a shitpoor job; that’s all I’m saying.

*Neither Andrew Wyeth’s death nor Walter Cronkite’s bother me too much as they were 91 and 92, respectively.  They deserve a good long rest.