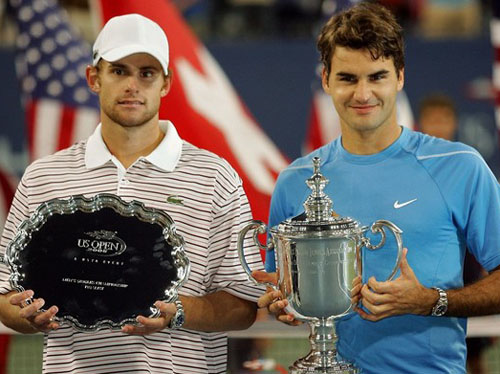 It's not easy to find a pic of these two gorgeous guys where they BOTH look dorky, but I did it!

Sunday saw Andy Roddick and Roger Federer play in what would later be described as a classic, epic or great tennis match-up in the Wimbledon final.

These people who have described the match in glowing terms would be wrong.

The match was a shining example of everything that is wrong with the sport in its current state.

I have said on this site before that I hate tennis. And that is true. It hasn’t always been that way. I used to like the game. Because of that, I still like to check out most of the big time matches. I watched all of this Federer-Roddick match.

It can not even be described as good.

This is the problem with men’s tennis, and it is a huge problem. The serve is way too powerful. Federer won without doing anything constructive against Roddick’s serve until the absolute LAST game. Pathetic. I don’t blame the competitors, really. Roddick and Federer are great players, especially Federer. They just did not have a chance to show off this greatness.

Here’s the thing, if in basketball, had they never instituted the 3 second violation, what would the game be like? They did that for George Mikan. What about goal tending? They changed that for Wilt. Same with not letting players move from the free throw line until after their shot hits the rim.

The point is: Rule changes in sports do happen. Tennis needs for that to happen desperately. I don’t know what size the serve box should be reduced to in Tennis, but it absolutely needs to be reduced. It needs to change so that more tennis can be played…and more importantly, more dramatic tennis can be played.

This match will be called an epic because this happens 2-3 times per year in tennis. A ridiculously close match is held and it goes on for a long time and a lot of games. People don’t watch much tennis aside from those 2-3 times, so they don’t really care. They talk about it for 2 days and then forget it happened until the next one comes along in a couple of months. Imagine how good the Roddick – Federer match would have been if you did not know who was going to win each game being played?