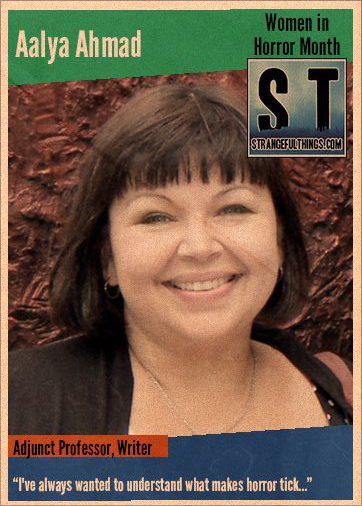 I started researching horror in university because I’ve been a lifelong fan. I completed my Ph.D. dissertation on horror fiction in 2010 and, along the way, developed and started teaching a course called “The Monstrous Feminist,” which focused on women in horror, representations, gender roles, etc.. It became a very popular course and I adapted it for different disciplines. You can read about it in my online Offscreen article (link below). I’ve also done public lectures on horror and media interviews, especially on that creepy clown phenomenon and around Halloween. I write short horror fiction and, with my colleague Sean Moreland, worked as an editor on the small press anthology series Postscripts to Darkness, spun off from the legendary Rolling Darkness Revue. I’m gearing up to teach a course on international horror film this summer and thinking about the next short story I’ll write!

I’ve loved it ever since I was a kid and would sneak downstairs at night to watch Hammer House of Horror films. I also loved Doctor Who, which could often be scary, and Edgar Allan Poe’s stories, which led me into the rich world of classic horror fiction. I agree with Stephen King that horror allows us to safely explore “the body under the sheet”; mortality, grief, disease, terrible injustices, and all the other bad things we don’t want to deal with (and yet we must). Adding in gender and other social and political contexts makes it even more interesting, when you consider how much our society represses. I’ve always wanted to understand what makes horror tick, why it scares us so, without explaining away the magic and continuing to hold the wonder and awe good horror conjures up!

Well, I’ve published academic articles and want to publish lots more about the social and political meanings of textual zombies, serial killers, vampires, etc., as well as Canadian and Indigenous horror, feminist goth-gore fiction and monstrous women. I try really hard to bridge gaps between the “ivory tower” theoretical world of the academy and the horror fan world because I consider myself to be a fan as well as a scholar, what Matt Hills would call a “scholar-fan,” I guess. That’s why I love doing public talks and interviews on horror wherever I can. I share the fandom’s general mistrust of overly academic analysis that doesn’t appreciate what a great work of horror does, as well as the tendency to focus on well-worn classics rather than the thriving, teeming world of horror production. So I always write about horror with that in mind. I’ve reviewed the work of local indie horror filmmakers such as my hometown Ottawa’s Monster Pool. I’m also really trying hard to accomplish more with my own writing and to try to get more of my work out on the market and publish some stories. For awhile, I was hoping to do a horror radio show on our local campus station with Sean Moreland, but that’s on the back burner for now. I’d love to make a horror film someday or at least help script and direct one!

You can find my online article on teaching horror in Women’s and Gender Studies here as well as a write up of my course by Ottawa Horror here. Check out Postscripts to Darkness, where I was the fiction editor for awhile here. I published a couple of stories there under the name Tisha Moor…

I think being a woman gives you some different perspectives on horror that are now getting more appreciation and respect than they used to. I loved the early work of feminist film critics like Laura Mulvey and Linda Williams, but at the same time, it bothered me that the proper response as a woman to a horror film was supposed to be a feeling of victimization and indignation or revulsion. I always loved horror films and fictions, and the feminist takes on them didn’t cover my experiences with horror, nor those of my friends. So as horror criticism and scholarship has kind of expanded and become more acceptable, it’s been good to ride that wave and bring the change as a researcher and educator to many minds. I’m proud of the course I developed and the effect it has had on opening the minds of many young women and men to the feminist and powerful possibilities of horror!

Don’t let anybody else define your boundaries or what you’re supposed to be doing because of the way you look! When I wrote one of the first horror stories I was proud of in a creative writing workshop, it was a gory thing and the class loved it. But my professor told me I should be sticking to writing in a “gentle voice” about trips to the lake and such like. It infuriated me but at that time, I lacked the confidence to completely ignore his opinion and so didn’t write again for many years. So do it fierce and do it proud, whatever it is! there are now so many amazing role models for women in the industry to look to for inspiration and support.