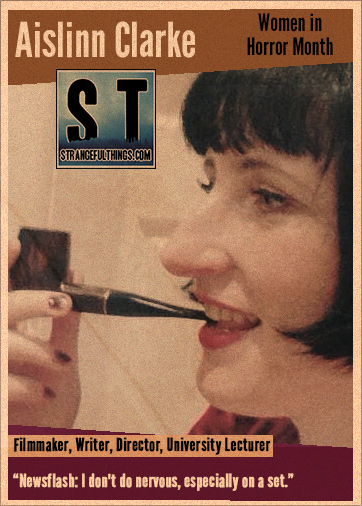 Aislinn Clarke is a film-maker and writer/director, whose work has been professionally produced for film, stage, and radio. She also lectures in Scriptwriting at Queen’s Universtiy Belfast. Aislinn has worked in film, TV, theatre, and radio, locally and internationally, for fifteen years. She is the first woman in Northern Ireland to write and direct a produced feature film, The Devil’s Doorway, which was invited to showcase at BAFTA in London, later screened at the Cannes Film Festival and has secured international distribution. It will be screened at the Berlinale film market this February. Aislinn is also contracted to write and direct feature film The Crossing for Boudica Films (who produced the BAFTA nominated films Iona, The Falling) and another feature film Touched for BAFTA nominated company Rocliffe. Her radio work has been broadcast on BBC radio nationally, as well as in the USA, Canada, and Germany. She has been profiled as a theatre director in The Stage magazine, and her theatre work has toured extensively across the UK and Ireland.

I’m quite freaked out by the idea of death and I’m also pretty squeamish. This may seem like a bad combo of traits for a horror fan and film-maker, but I think horror is a genre for scaredy cats. Horror, the best sort of horror, allows us to explore and test the waters of all the darkest parts of the human experience, including those which are unavoidable (I.e death, pain, grief) in a safe way. In horror films there is an internal logic. They are essentially safe in a universe where real life horror is often so senseless and without logic. Horror is a safe way of inoculating ourselves, so to speak, so that we can tolerate and understand real horror and the associated emotions without completely losing our minds. Cheery, aren’t I?

Honestly really don’t know where to start or end unless you want a novel.

I can’t really answer this because I don’t know what it’s like to not be a woman in the industry. I guess I have experienced a lot of “Oh, YOU’RE the director?! You must be REALLY nervous?!” Comments. Newsflash: I don’t do nervous, especially on a set. I have also had people describe my work as “collaborations” with my male crew much more than they do for my male peers. All filmmaking is a collaboration, but I am no less or more of a filmmaker than the last man who used my same crew, or the next one. By the way, I always have an extremely talented and hardworking crew and I appreciate them very much.