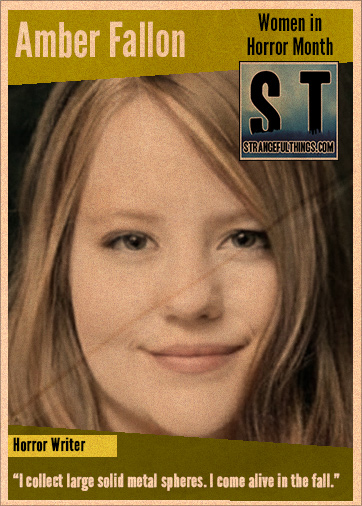 Hi! I’m Amber Fallon! I write horror, mostly pulp, some bizarro, some quiet, basically whatever sounds interesting that moment, but there’s always a horror bent to it, or at least horrific elements. I host a podcast about food. I’m a techie and my day job is at a software company. My favorite movie is Ravenous. I have a crazy little dog. I collect large solid metal spheres. I come alive in the fall.

Horror is sort of in my blood. My mother wanted to name me Edgar, after her favorite author, Edgar Allan Poe… then I was born a girl. That didn’t stop her from reading Poe’s stories to me, however. As I got older, I discovered King, Lovecraft, Shelley, Stoker, Jackson, and more. I also grew up on the classic Hammer horror films, Vincent Price, Bela Lugosi… you name it. I recently fulfilled a childhood wish and acquired one pf those Dirt from Dracula’s Castle pendants that were advertised in Eerie and Famous Monsters of Filmland.

My first novella, The Terminal, is a pulpy schlockfest with aliens taking over an airport. My next novella, The Warblers, is a coming-of-age tale with monsters… less pulp, more weird. Then I released a collection called TV Dinners From Hell, which is a love letter to shows like The Twilight Zone, The Outer Limits, and Monsters.

It’s hard to be taken seriously sometimes. I’ve had guys come up to me at conventions and either insist that what I write isn’t horror, it’s paranormal romance… which it isn’t. I don’t write romances or really a lot of traditional paranormal stories… or they insist that I don’t really write my books and that my horror-hating husband must actually do it for me, just so I can look different. I’ve had people suggest that my extremely modest success is because I’m female, not because I have talent or I work hard.

There are more of us out there, so reach out to some of your sisters-in-arms. Sharing those experiences helps you not feel so alone.