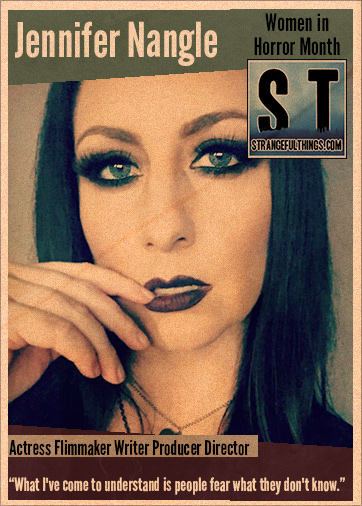 Jennifer Nangle was raised on Boston’s North Shore where she jumped onto the stage at an early age and never looked back. She received her BFA in Theater Studies at Niagara University and promptly move to Los Angeles with stars in her eyes… She enrolled at the Laura Henry Acting Studio in Santa Monica and dedicated two years to studying the Meisner, Linklater, and Alexander Techniques. Not one to sit still for too long, she jumped at the chance of creating her own ancient alien role MaKenna for the comedy sci-fi webseries GUIDES, but horror has always been her main love. Her short film “Demonic Attachment” made a bloody splash into the film festival circuit snagging (lucky number) thirteen laurels and many awards (Nangle particularly being both nominated and winning best actress for her portrayal of “Jennifer Ryan”). You can see her in “Irrational Fear” & the award winning horror short “SLIT” along with upcoming features such as “Lilith” and “Ugly Sweater Party”. She is also the newest award winning horror host on the YouTube webseries “Malvolia: the Queen of Screams”.

It can be unpredictable. It can get dirty, blood, and terrorizing. You never know what surprise may pop up or when a random kill will happen! I love the journey that we go on while watching a horror film!

I”Lilith” where I play Lilith will be coming out this Spring/Summer. It’s a horror anthology based on Lilith, the demon. I got to work one on one with Vernon Wells. Such an incredible and challenging experience! I’m apart of the “Paranoia Tapes” franchise which will start to drop early Spring. Malvolia: the Queen of Screams will be coming back for Season 2! And lastly, I have been cast in Deranged Minds Entertainment’s “Inverted” which begins filming in June. I have a lot of short films I’m writing and will be filming and submitting into film festivals. Also, my short film “The Deal” is still going strong on YouTube with 2.1 million views!

I am sometimes treated like I have no idea what I am doing. The other day when I was on a set, the director said, “Go watch. See how to set up a shot.” It’s frustrating because I’ve set up many shots before. I work on “no budgets” and I create stories out of nothing. Also, because when I have used my body “assets” as part of creating a character and using it within the story, some people attack that first. “Sell out.” “Fake.” What I’ve come to understand is people fear what they don’t know.

You’re going to have to work a lot of positions on sets that you don’t want to do and wear multiple hats while doing what you love. However, not only is it going to make you stronger, you are also going to know how every position on every set works, so you can easily do whatever is needed and expected of you to do your own work. Therefore – you become Superwoman!