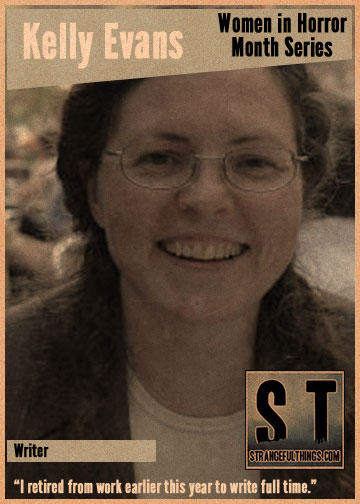 Hi, I’m Kelly Evans! I was born in Canada of Scottish extraction and graduated in History and English from McMaster University in Ontario. After graduation, I moved to the UK where I worked in the financial sector. While in London I continued my studies in history, focusing on Medieval England and the Icelandic Sagas (with a smattering of Old Norse and Old English – tip: swearing in Old Norse is a really effective conversation stopper!).

I now live in Toronto with my husband, Max, and three rescue cats (Bear, Wolf, and Jones). I retired from work earlier this year to write full time (horror and historical fiction, sometimes combining them). When not writing I enjoy watching really bad horror movies (I mean seriously bad, especially anything giant insect related), reading, and playing oboe.

II guess the same as everyone else, I loved being scared out of my wits! But I also love the old 40s and 50s horror movies, giant insects, aliens, robots, and what they represented to the people watching at the time, the fears Hollywood tapped into.

I’ve written many horror short stories, as well as a historical fiction novel (The Northern Queen: Anglo Saxon England, vikings, etc) so it made complete sense to me to combine the two.

My second novel (The Mortecarni) takes place during the Black Death in England, where the plague isn’t the only thing terrorizing the country!

The sequel to The Mortecarni will be released early summer this year. After that I have plans for a novel, I’m not sure of the genre (fantasy? steampunk? horror?) where Tesla meets Frankenstein’s great niece.

(In my spare time I also write articles about entertaining and managing your medieval manor during the Black Death, all written by the satirical Lady Matilda).

This is a difficult one! I’m lucky, my name can be used for both men and women so perhaps people don’t realize I’m a woman? And the main character of my horror novel is a man, another reason perhaps to not guess my sex?

I think, with the genre dominated by men (I’m speaking writing here, I know a LOT of women are involved in the movies, not so much directing or producing but on the acting side), a successful women horror writer may be a bit of a novelty.