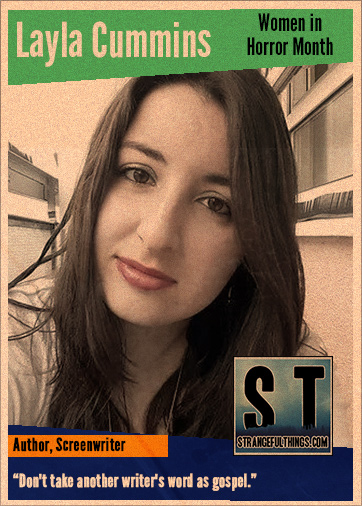 She was a finalist in the 2014 Sir Peter Ustinov Television Scriptwriting Award and lives in Bristol, England with her family and two cats.

I’ve always loved horror, even as a three-year-old getting my kicks from Jaws, and later reading Stephen King and playing Resident Evil. I’m not sure why I enjoy it so much. It’s just something I naturally gravitated towards and it’s stuck. I’ve grown up with it. I like being surprised, particularly when it comes to horror movies. After seeing so many, it’s satisfying when you can predict what happens next, and even more so when you can’t.

I’m just coming up to the finishing line of my degree in English Literature and then, after a brief rest, it’ll be back to the desk. I’ve two short stories that are in need of serious editing, an idea for a TV pilot, and the last two thirds of a zom-com movie set in Glastonbury that has been brewing in my head for some time now. I’ll be very busy.

I haven’t had any issues so far that I’m aware of. I’ve worked with male and female editors who valued my input and have never felt any different because of my gender. Though I’m not ignorant enough to think that it’s all equal across the board. It was disheartening to read about how author Catherine Nichols received more responses from agents when she submitted her work under a male pseudonym. It has made me wonder whether or not I should follow suit and send my own stuff out under a male pseudonym too.

Think about all the weird and slightly crazier things you’ve seen, done or heard about, and think about how it could be a story. Go for those opportunities you think you don’t have a chance in hell of getting, submit your stuff anyway. And don’t take another writer’s word as gospel; shop around and see what suits you best.