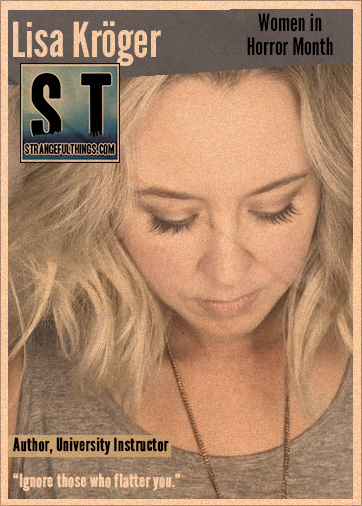 I’ve got a PhD in Gothic literature. I write horror and thrillers, but I also write nonfiction about the horror genre. I’m one of the hosts of the Know Fear podcast, which is a part-academic, part-pop culture look at the horror genre (though we also veer into Sci-Fi and Fantasy territory occasionally). I’m also a mom (of two boys and one rather large dog).

I always have. It started with Scary Stories to Tell in the Dark (as a probably too-young child) and grew into Christopher Pike in my teens. Funny thing, horror always scared me. I had to hide my eyes when I walked past the horror tapes in Blockbuster. But I was drawn to it. As my interest in academic literature grew, I incorporated writers like Poe and Lovecraft. Now, I read (and watch) anything I can get my hands on. It still scares me, but there is catharsis in the fear. Plus, it’s fun.

I just signed with an agent at Dystel, Goderich, and Bourret, so my novel (a psychological thriller) is out on submission right now. I am writing short stories too (Cemetery Dance just bought one of my stories, “Tick, Tick”). I’m working hard on the podcast, to elevate the horror genre (for those who dismiss it as schlock and gore only) and also to highlight lesser known writers and texts (I love Stephen King but he’s just the tip of the horror iceberg). I also have two essay collections out (one on Shirley Jackson from Routledge and one on ghosts in literature and film from Rowman and Littlefield). I’ve also contributed to The Encyclopedia of the Vampire, EcoGothic, and Horror Through History.
I’m also working on a new brainchild about women in horror. It’s in the beginning stages, but I’m excited about.

Gender is a knife that cuts both ways. Sometimes, it does get me attention. When I’m in a room full of writers and other industry people, I do stand out (I’m blonde who prefers pink over black with a Southern accent–not exactly the horror cliche). I think this makes me memorable. But, more often than not, people dismiss me, as if my gender means my brain cannot think up gross and horrific things (it can–I can gross people out with the best of them). Even worse, sometimes (online mostly) my gender makes me a target. I’ve had problems with people expecting something from me. Men want to have intimate and private messages (one got angry when I wouldn’t respond and began calling me names). I’ve had inappropriate comments made about looks. Thank goodness for the “block” function.

No one is going to grab you by the hand and pull you up into success. You have to do it yourself. Ignore those who criticize you along the way. Ignore those who flatter you. Just focus on writing the best work you can.