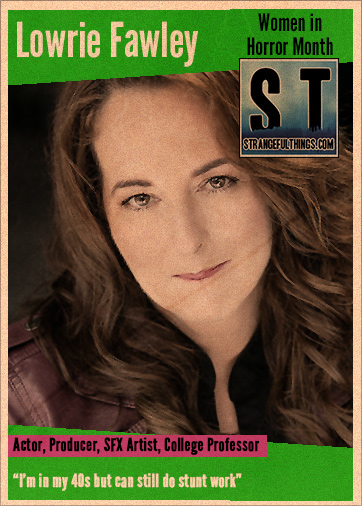 I am a former theatre actor and director.  I’ve been working in film for 4 years and cofounded Rogue Chimera films.  I started in horror in haunts and was with blood manor NYC it’s first 3 years.

It’s intellectually diverse and liberating.  Horror works on base emotions. It allows a safe space to confront fear and to express impulses we know we can’t actually do in real life.

Most recently: “Coming Home”, the prologue to “The Family Way” feature that we are seeking investors for. “Coming Home” just finished it’s festival run and is available on Amazon. Also in preproduction for “Father of Lies” shooting in May.  I am also promoting a play based on Poe’s life that I wrote and produced in NYC in 2008.

I would say both. As a producer it’s hard to be taken seriously. Working in SFX I find people question until they see my work and then there’s no issues. As a actress I sometimes find more age discrimination than gender. I’m in my 40s but can still do stunt work and have no fear of nudity if required but most female roles are for 18yr olds.

Whatever you want to do just be you. You are enough!