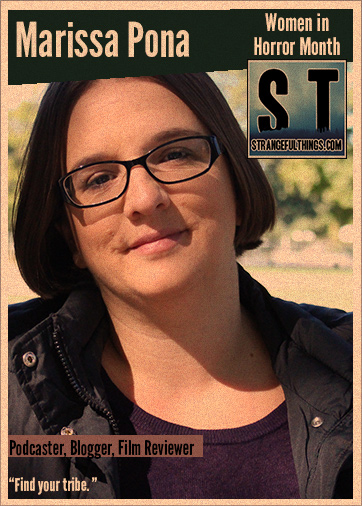 Hi there! I am, first and foremost, a film critic and podcaster for Jersey Ghouls, a horror movie podcast and website that tries to promote feminist readings and perspectives on horror. I also contribute reviews and other pieces to some other horror sites.

I love reviewing and screening independent horror, especially if there are women at the helm. Most recently, I had the pleasure of having a tiny part in the production of Sam Kolensik’s newest film, Mama’s Boy.

I write my own screenplays, and am so excited to be judging the screenplay submissions for Women in Horror this month.

My biggest goal is to push for academic analysis and gender and racial equality in horror to finally come to the forefront of the genre.

This is a fascinating question. I guess I can thank my incredibly permissive and absentee parents for allowing me to watch any and every piece of horror I could get my paws on as a child. I loved the storylines, the special FX, and the tension of the films.

As I got older, I realized that this genre I loved so much was so often guilty of misogyny and lack of representation. It was George Romero’s Night of the Living Dead that made me first realize horror could be socially responsible too. At that point, I became dedicated to tackling the genre from my own perspective, and rallying for gender and racial equality in horror.

t’s difficult to be a woman and be taken seriously as a writer, producer, or creator of horror. There is still very much a sense that women are somehow incapable of creating gore and visceral horror. While we are slowly challenging these assumptions, it is clear that Hollywood still has a long way to go before women are treated equally to men.

On the plus side, it gives feminist horror lovers a great goal and perspective from which to approach the genre.

Find your tribe. There are so many amazing, talented, and kind women and men who are committed to the same things that you are. Without finding these individuals, the horror world can feel like a mean and aggressive place.

Every door that has been opened to me is, in large part, thanks to all of the amazing people who have shared my vision and passion for promoting women in horror.