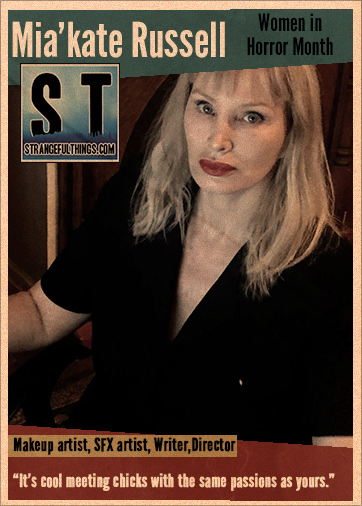 Years ago someone said I couldn’t have a conversation without talking about films. I thought about it a lot, then realised they were right, and that if people couldn’t talk about films a lot I probably shouldn’t talk to them that much.

I’ve always been a horror hound. Growing up it was me and the boys who would watch horror VHS over and over. Then I discovered rotten.com which became an unhealthy addiction, and soon after that SFX makeup.
Once I got into SFX I met a world of guys who were just like me, and we’d share favourite dismemberment photos, and talk about ghosts and all things spooky and fun.
It’s hard to pin point ‘why do you like it’ that’s like why do I like chocolate? It’s just something I’ve always loved, eaten daily, and will never be without.
It’s only been the last 6-7 years I’ve started meeting women who are also into horror, and It’s cool meeting chicks with the same passions as yours.
Recently at an OS film festivals I saw a short film from fellow Aussie filmmaker Heidi Lee Douglas. I just felt proud! You may meet these girls once at a festival, but you know how hard they’re working, and just want them all to do really well.
There’s definitely comradeship with women in horror.

The aim of my next film is to make people gag while watching it. One of my favourite compliments is when people look at me with disappointment in their eyes and ask “what’s wrong with you”
Last week I realised I that the worms my son feeds to his lizards, could be used on a corpse. I was probably more excited than I should admit to. But seriously, how much fun is a worm in the eye.

In 2013 I was at Sitges with my short film SWALLOW and was the only female director. When I was called on stage before the film, I was introduced as an actress and the guy I was with the writer/director.
That was only 5 years ago, but since then I feel like women in horror has completely exploded, and there’s no way that would happen today.
Having said that though, I do think women are given many less chances as directors. As a makeup artist I arrive on set and often meet male directors in their 20s who are employed because they show promise. I look forward to women being given that same level of faith in the film industry one day.

If you’re a horror chick you know it. You’ve been reading gory news stories and watching scary films with glee for ever.


Thanks to social media networks, women in Horror is one of the most supportive and friendly bunch you’ll come across.

I’ve never seen competitiveness once, but constant encouragement and love, in fact considering the common thread is horror, these are the sweetest folk you’ll come across.