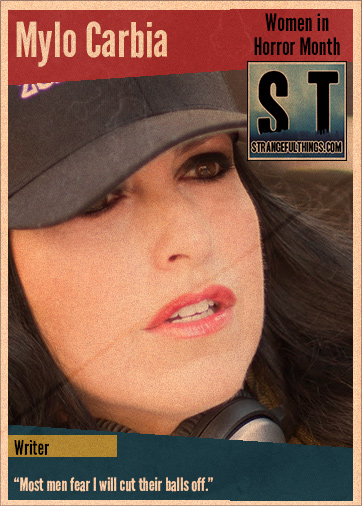 Mylo Carbia is a Hollywood screenwriter turned #1 bestselling author widely known for her work in the horror-thriller genre, and trademark of surprise twist endings. Ranked 7th in “The Top 10 Horror Writers Alive Today” and among “The Top 250 Most Influential Authors” by Richtopia.com, her award-winning writing style has been described as “a perfect mix between Stephen King, M. Night Shyamalan and Quentin Tarantino, but infused with a signature female sharpness that is all her own.”

Born in Jackson, New Jersey, Carbia famously spent her childhood years writing to escape the terrors of growing up in a severely haunted house. By the age of 17, Carbia was already well established as a prolific young playwright. By the age of 30, her very first screenplay was optioned only 28 days after completion, earning Carbia a three-picture-deal and the cover of Hollywood Scriptwriter in 2003.

After that time, Carbia moved to Manhattan and quietly penned numerous television and film projects under her production company, Zohar Films. While she was there, she worked for several famous writer-directors, earning the nickname “The Queen of Horror” and the reputation of writing killer twist endings.

In 2015, Carbia announced plans to release a series of novels (and matching screenplays) all featuring strong female protagonists. Her debut novel, THE RAPING OF AVA DESANTIS, hit #1 bestseller and won five ‘Best Novel of the Year’ awards including the prestigious 2016 Silver Falchion Award for Outstanding Achievement in Fiction.

The movie version of her bestselling book is targeted for release in 2020.

In addition, her highly anticipated follow-up novel and movie, VIOLETS ARE RED — A horror-thriller about an aging Manhattan housewife who captures her husband’s young mistress and quietly keeps her prisoner in the basement — will be released in 30,000 bookstores worldwide on June 15, 2018.

I spent the first thirteen years of my life growing up in a haunted house in Jackson, New Jersey. I have the ability to see and hear both human and non-human entities, so I guess I really did not have a choice in the matter. Horror is literally second nature to me. The truth is, I have ghostwritten comedies, historical dramas, and comic book movies, but why I stay in this genre is that horror fans are truly THE BEST in the world. I have over 100,000 followers across all social media platforms, and love each and every one of them. They are my GHOST BABIES!

I am totally obsessed with my upcoming novel (and movie), “Violets Are Red.” I feel like it’s my best work to date in that I was able to pull off something in the final twist that is completely new… So, I am eager for readers to check out the book when it’s released worldwide on June 15, 2018.

The story is about an aging Manhattan housewife who captures her husband’s college-aged mistress and quietly keeps her prisoner in the basement. It’s like “Sex and The City” meets “Misery,” but with a dark, twisted ending… You know, the “crazy bitch” shit I’m known for.

The best part of writing this novel was being able to fully explore the universal battle of two women fighting over the same man, and the consequences of such a battle. The psychological mind games between the two women are phenomenal, and given that I set out to write a modern-day fairy tale, the references to Brothers Grimm throughout are thoroughly entertaining. I really believe people who are typically afraid of reading horror will absolutely love this novel.

I honestly have not run into any problems being female in this industry. I think it’s because most men fear I will cut their balls off if they look at me the wrong way.

The best advice I can give an aspiring female writer is to secure a day job that allows you the time to write, no matter what it pays. And if you are a screenwriter, you must seriously consider making the move to Los Angeles. Authors, however, can live anywhere in the world with Internet access, but new screenwriters need to be on the ground to make it happen.

I can’t tell you how many talented ladies have written excellent scripts, but are so tied to their spouses, hometowns, and careers, that they cannot make the leap to Hollywood. Truth is, producers would rather hire a hungry waitress in Los Angeles who has written five decent screenplays, than a tenured college professor in Colorado with one magnificent script. They need to know you will be 100% committed and available for the development phase of the movie. The idea of leaving your job AFTER you get an option, does not show the level of commitment that producers want to see if they are investing in you as a writer.

So, I encourage people to be honest with themselves… How bad do you want this? Are you willing to scale down your expenses and live the life of a professional writer? Is your spouse on board? Your children? Your parents? Can you take the financial ups and downs that come with this business? Are you okay with receiving a large paycheck only once every two to three years?

Again, the life of an author is much more forgiving. I, myself, spend a lot of time in Palm Beach, Florida now, and only travel back to L.A. and New York for business. Which is why I encourage writers who have serious life obligations to consider this as an option.