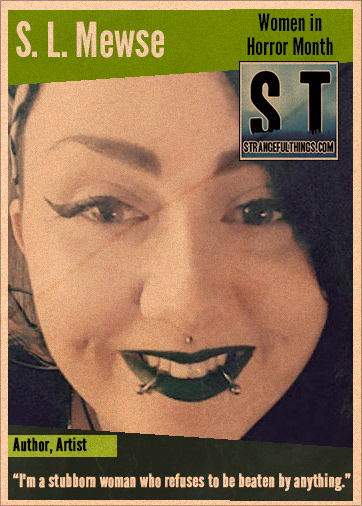 Like the fabulous Soska sisters, I’m a twin (though non-identical in my case). I’m a thirty year old, long-term horror fan and creature-feature obsessive who is also keen on body modifications, good music and I’m a huge animal lover.

I got into writing seriously after I was diagnosed with cancer in 2013. I lost my job at the time, and I decided that if I was ever going to follow my dreams, that was my chance! Since then I’ve published four novels and a short story in an all-female anthology from which all proceeds go to cancer research. I’ve also branched out into taking digital art commissions and have plans for a horror comic. I do all of my own cover artwork.

My dream is to earn enough from my writing to not only live on, but also support the hospital that treated me and cured my cancer.

I’m a stubborn woman who refuses to be beaten by anything, and I love horror too much to quit!

I love horror for so many reasons! I love the raw emotion it pulls out of people (like so many yards of dripping entrails!) It is impossible not to be moved by it in some way, whether that be outright terror or a creeping sense of dread. It touches parts of our brains that as a civilised species we’ve largely lost touch with, and I think that’s invaluable.

Horror is escapism perfection and blood soaked excitement, and I love every minute of it!

My main works are the books in my Primal Progeny series, which are werewolf and shapeshifter based tales. I’m a huge fan of descriptive gore and I like to put my characters through the mill. I try not to shy away from any subject matter and I enjoy tackling taboo. I believe that I am the first to connect lycanthropy with spongiform brain disease, and those who cannot control their hunger suffer greatly. My characters are varied in age, gender, origins and orientations and some of my favourites are females.

I purposely used my initials as opposed to my full name as having come from a tattoo background, I was acutely aware of how hard it can be for women in male dominated industries.

I do find that when I share tables at conventions with male authors, as I sometimes do, that the men get more interest from passers by.

Don’t ever be discouraged. Keep on putting yourself out there and have faith in your work. So long as you love what you’re doing, you’ll get there.