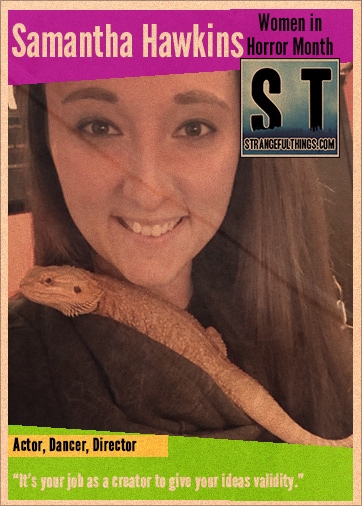 In short, am kind of a failed science kid who fell into independent horror in the weirdest of ways. I love my day job as a dental assistant, in part because I get to mitigate many much-feared experiences, and in part because it allows me time away to indulge my inner creative. After being denied from dental schools around the country for two cycles in a row, I entered a Swede film contest with my best friend. Our entry was selected as one of the winners, which metaphorically lit us on fire. Since then, we’ve expanded our creative team and we have a couple short films in pre-production that we can’t wait to share.

Horror intrigues me because it elicits such intense, visceral reactions in people. The toughest person may hide behind someone when someone gets slashed on screen. Someone who doesn’t normally display emotions may cringe at body horror, or scream bloody murder at a jump-scare. Understanding and alleviating people’s fears is part of my job. Horror exposes us to our fears at a safe distance, which I think is a cool way to help us handle our normal day-to-day fears.

Most excitably, my best friend Kimberly Pipkin and I were invited to contribute to the 2018 Women In Horror Month Massive Blood Drive PSAs. Our piece “Party Prick” dropped on February 7th and is available on the Soska Sisters’ YouTube channel, as is our Swede contest entry. For now, we are storyboarding a short film directed by Brett Haynes (who you’ll see in our work quite frequently) entitled “The Lover,” which will be released later in the year.

We’re pretty new to the independent horror world, so nothing about being a woman in it has really “hurt” us yet. However, the other women I’ve met through our mutual love for horror have been the kindest, most supportive people on earth. Jen and Sylvia Soska are working tirelessly to shatter stereotypes about women in film, to open up the industry to voices that may otherwise go unheard, and to spread kindness and love to everyone they encounter. The world needs a hundred of them. Additionally, we were recently lucky enough to meet Dayna Noffke (who recently directed “Sanguino” for the Massive Blood Drive PSAs), her daughter Viva (aka the Littlest Monster Maker), and Lynne Hansen (producer for Vanessa Wright’s “Be A Hero” Blood Drive PSA and creator of the “Make Films Like A Girl” Facebook page). Their support for one another and for new faces to the industry is unlike any other. I’m thankful to live in a time where women can build one another up.

The biggest thing I’ve learned is that people often will not take your ideas as seriously as you do, and it’s your job as a creator to give your ideas validity before anyone else will. You have to believe in yourself and be persistently passionate about your work before you can expect others to. Also, I can’t stress enough how important it is to be kind to everyone you encounter. Today’s horror fan is tomorrow’s studio head (not to mention, kindness just feels better than resentment).