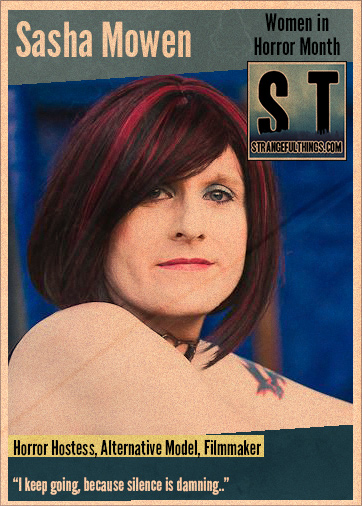 Tell us about yourself: I am Sasha, the Princess of Darkness- the first and only Transgender Horror Hostess on YouTube, Twitch, Live from Playstation and most social media! I review horror/scifi films, some vintage/nostalgia themes, do podcasts, some alternative modeling, MC Live Events (like Comic Cons, Comedy Acts and Pin Up Shows), write and working on some upcoming small films – all while promoting Transgender Visibility and Awareness. Click the article links below to read more about me, my LGBTQIA Activism, and more.

Growing up an Army Brat it was my only escape. We moved a lot but there was always a late night creature feature on cable, a drivein nearby that you could watch through binoculars, a grindhouse or mom pop cinema, or a VCR at my disposal. My mother always had a love for Horror, and while most kids had Sesame Street – I had Joe Bob Briggs and Elvira. While my dad was in the field or overseas mom and shared many a takeout pizza and bad horror flick together. Those are my fondest memories of growing up. I was a monster kid born twenty years too late, a goth before it was cool and sold by Hot Topic.

Right now I’m working on the Princess of Darkness film. Lots of scripting and rewrites, along with some preproduction and some tests on potential effect shots I have in mind. Think of “Feast” meets “Evil Dead 2” with equal parts of “Return of the Living of the Living Dead” thrown in along with yours cruelly as the first wisecracking Transgender Horror Heroine. Hell I already have a few idea for a sequel but for now, it’s all low budget and just plain fun guerilla filmmaking. As always, I’m working on new Episodes of the “Sasha, the Princess of Darkness” Webshow, “Tourist of Terror & the Saturday Morning Cereal Killers” Review and Further Podcasts of Darkness. Testing out some new Live Content called “Sasha’s Double Creature Features” – Basically I let my audience choose 10 monsters at random via Livestream, while discussing each one after pounding a shot of some strong hard liquor per beast… as progressively get drunk… Hilarity Ensues.

Well, being a transgender woman, it’s hard to be taken seriously… and though I have fun and can laugh at myself frequently, I do take this all very seriously. Then there’s the whole hate aspect because I’m Trans. I’ve gotten Death Threats, told to kill myself, have been assaulted and worse… But I keep going, because silence is damning. Sure, I could be like all the other visible transgender entertainment personalities out there – somber or jarringly sobering- but that isn’t me. You can deliver a powerful message, while just doing and talking about the things you enjoy. I can get into an in depth discussion of 70s movies and television with anyone, and most come away with the fact that “wow, you’re very knowledgeable on this” and we can meet as equals without my gender ever coming into play. It’s one of the reasons I love the Horror Genre and Fandom. It’s about equality, we all bleed RED. Gender can, just go out the door… and remember, in horror, it’s the Scream Queens who are the Heroine most times than not.

Sure, it sounds like threadbare and worn thin shoe ad, but just do it. Put yourself out there. The advent of the internet age has given one many ways to put themselves out there. Make a video! Start a blog! Find local filmmakers and work with them. Talk about what you love! Go to conventions! Just do it. Don’t just start a Modeling Page and go to auditions… make your own niche. Do what makes you happy. Forget the naysayers and critics. Even a negative reaction is still a reaction. Indifference and silence is more worrisome than anything. You got a voice and I assure you, there’s an audience out there for anybody. Promise.