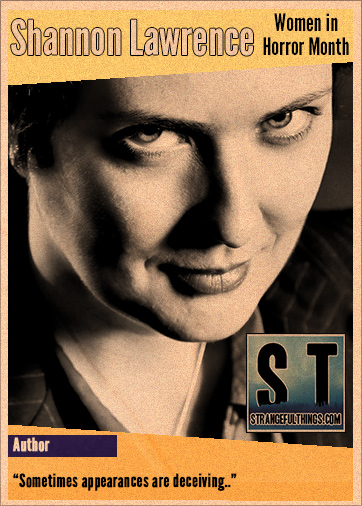 I’m first and foremost and horror short story author, though I also write fantasy, creative nonfiction, mystery and whatever else inspires me at any given time. I’ve had over twenty short stories published in magazines and anthologies, and I’m working on a couple novels, too. My day job has me calling medical facilities for medical records and patient billing for personal injury attorneys, but night time is writing time. I’m also a mom of two and wife, and until recently I did a lot of volunteer work for local writer’s groups. I blog at www.thewarriormuse.com.

Horror is real. It’s visceral. It stirs the emotions. Horror is cathartic and purely human (even when the monsters aren’t.) It allows for emotional release. When I’m down, it’s horror I turn to in order to be removed mentally from stress and sadness.

I’m putting together my first solo collection of short stories, for release March 15. Most are stories I’ve gained the rights back on after being published elsewhere, but there are a few new ones in there, too. My pet project is a horror comedy novel about killer squirrels that has been so much ridiculous fun to write.

I’m not sure my being a woman has had an impact one way or the other. I’ve never gotten the impression that any rejections were due to my being a woman, nor my acceptances. It’s fun when people are surprised upon meeting me or finding out I write horror, though. Sometimes appearances are deceiving.

Let your freak flag fly. Release those forbidden emotions. Scare them, disgust them, make them think, but do it all on you.