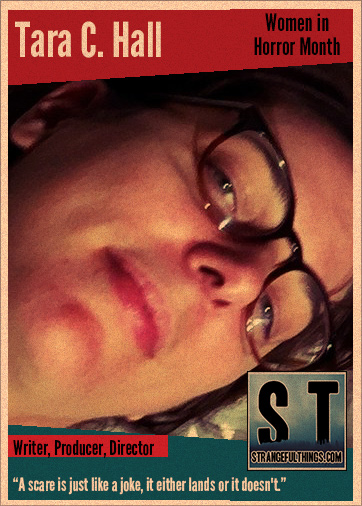 I live and work in Los Angeles with my husband and creative partner, Joshua Johnson, our two kids and some pretty ridiculous cats. I’m obsessed with true crime, especially anything to do with cults, the satanic panic, and prolific serial killers.

I’ve always been drawn to darker stories and subject matter. When I was little my brother used to put on horror movies to get me to leave him alone. Now I make them and I live 5 minutes away from him. When I was in high school I saw Evil Dead and Evil Dead 2 and they made me want to be a filmmaker. I love horror for the same reason I love comedy. The audience response is so visceral. A scare is just like a joke, it either lands or it doesn’t. Eliciting that sort of involuntary response is such a challenge, but so worth it when it happens.

The first screenplay that Josh and I wrote together was a werewolf script we did in our first year of marriage. We eventually abandoned it, but I always thought it was a good metaphor for that newlywed phase. You know, that phase were you’re discovering things about your S.O. That part of the relationship is a little scary. Years later, we finally released our first feature, Buzzard Hollow Beef, which is (shameless plug) available on Amazon Prime, iTunes, and Google Play . We are currently developing a female serial killer thriller, a sequel to Buzzard Hollow Beef and I’m finishing a home invasion thriller. I’m also directing a horror short in March. As for non-horror related projects, I’m in two sketch groups: “Great Aunt Sally” and “Favorite Children”. Both will be dropping videos in the coming weeks.

I don’t know if being a woman held me back in a quantifiable way. I will say, in regards to horror, I was turned off from it entirely for a while. There was an era where it seemed like the same films were being made over and over again. They all had the same adolescent sexualization of violence towards women. And it wasn’t just that I felt targeted as a woman, I felt like the guys making these films didn’t care enough to make good films. I’m very glad that is changing. We’re in the midst of a genre renaissance.

If you’re not making that film that only you can make, you’re depriving the world (and more importantly me) of an entertaining, inspiring, fun, gory, terrifying experience. Go make your horror film!