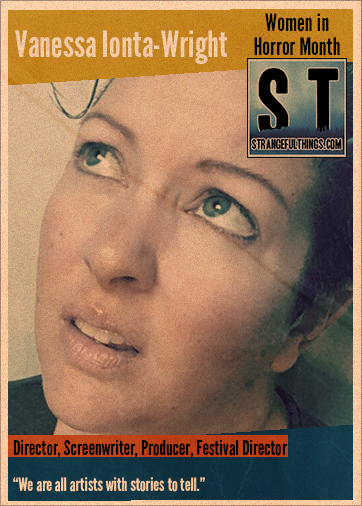 I am a filmmaker based in Atlanta, GA. I got my professional start in music videos & commercials working as a PA and assistant production coordinator. For the past few years I’ve been focusing on writing and directing and directed my first short film, Rainy Season, based on the story by Stephen King at the age of 40.

I think it’s the visceral reaction that fear ignites. The anticipation, the shock, the anxiety…there’s nothing like it. It’s an absolute rush.

I’ve had some success with my screenplays in various competitions, but ultimately, I’ve always been interested in directing which is where I have put my focus. I have directed 3 shorts so far, Rainy Season, I Baked Him a Cake and a PSA for the 2018 WiHM MASSIVE Blood Drive, Be a Hero.

I also co-founded and direct the Women in Horror Film Festival with Samantha Kolesnik.

I honestly don’t know if it has helped me or hurt me. I certainly don’t think I’ve missed any opportunities because of my gender. I think with movements like Women in Horror Month and other women in film initiatives they have definitely shined a light on some of the amazing work being created by women in the industry.

I wish someone would have said “Hey Vanessa, I have a shit ton of cash to invest in your work. Come and get it!”

I’ve actually been very blessed to be surrounded by very encouraging friends and family. I think at the end of the day, you need to feel supported in this industry. We are all artists with stories to tell and I think the key is community, support and encouragement.