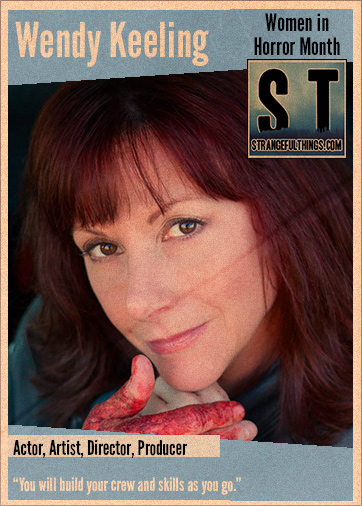 I am an actor, artist, and an accidental director/producer. I did not grow up wanting to direct films. I wanted to be an actor and I wanted to be a vet. The vet thing didn’t work out because I didn’t want to put animals to sleep. I did the acting thing growing up but when I went to Chicago to pursue it, I was too caught up in being perfect all the time. Needless to say I failed!! I decided to try it again as a “not 20 something” and found out that I did not suck anymore. Sadly there is not alot of work out there for older character actresses so I decided to start making my own opportunities. Thus, I am an accidental director/producer out of necessity. Evidently I OK at it so I keep producing more work.

I am a big fan of horror and horror comedy. Growing up I was drawn to all the crime shows, who done its, and sketch comedy shows. I think I may have been predestined to a very dark sense of humor. Things that go bump in the night and make me think about what may come next turn me on. I will admit that I am not as big a fan of slasher stuff. It is possible that I walked in on a babysitter watching something like that while making out with her boyfriend and was permanently scarred. Otherwise I love the horror genre!

I am a “flipper” which means I go from talent to director/ producer. I am one of those actors who decided to learn the biz and create my own content instead of waiting for the world to find me.

I have a few films that I directed and acted in touring the film festival circuit right now.

“The Unconventional Gourmet” is a short film retelling of an old fairy tale with a little twist. It has done quite well on the circuit and is wrapping things up this Spring.

For some reason I seem to continue to work with children and young adults in my films. This film is just full of smiling young faces waiting for a bad ending! I was lucky to have a fantastic cast and crew on this film. We had the talented Mark Ramey as DP and had the amazing acting talents of Wynn Reichert, Manon Guy, and Grayson Kilpatrick.

“Shades of Scarlet” is another short dark comedy about a man released from prison early touring the festival circuit right now. Written by Wynn Reichert, it is less of a horror but still twisted and a bit bloody in the end. I can’t say much more or I would give it away. Many thanks to Mark Ramey again as DP. Plus talented actors Wynn Reichert, Susannah Devereux, Lucy Turner, and David Ditmore who helped make the story come to life.

“Sarah’s Dream” is the newest short film and is about to start the festival circuit in March. It is definitely another horror comedy. This was a last minute collaboration of Wynn Reichert and I on the set of a commercial this December.

I was looking for a new project for the 2018 festival circuit but it needed to be zero budget and something we could shoot and edit quickly. Wynn came up with a brilliant short screenplay and I was excited to jump in. Unfortunately, I had a little accident with my artist job and a table saw while cutting wood. Some have joked that I did it for research on effect makeup which could be true. The end result was the table saw won and my thumb had to be sewed back on.

As in any good story, the show must go on! So, we got the cast and crew together and managed to shoot the film 12 days later. Needless to say I have a pretty big bandage on my finger but I seem to hide it pretty well on camera. Hopefully you will see it on the circuit this year. Kudos to my talented DP Nolan Uebelhor. Also to my talented cast Bailey Ingersoll, Sam Brooks, Allison Shrum, and Wynn Reichert.

I have a few screenplays in the works. All are features and on the horror spectrum. Hopefully we will have funding for the first film “Medicine Show Blues”, written by Jeffrey Howe, to start shooting this fall.

It is a mixed bag being female in the film industry. You have to work harder to make people believe in you. But I truly believe that women have new and interesting stories to tell. There is just something different working in Indie Film and Indie Horror. Women have something special to add to the mix with their point of view and visual story telling.

Just come up with a good story and shoot it!! Don’t wait for the perfect moment with tons of money to make it happen. You will build your crew and skills as you go. I promise you there is never going to be a perfect moment.