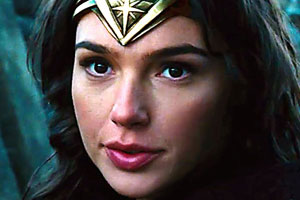 There will be *SPOILERS* below.

Last night I went to see Wonder Woman at the 4DX theater in Union Suare in New York City.  And originally I was going to write about the 4DX experience and do a separate review of the movie.  But Wonder Woman took my breath away so I really don’t think the 4DX thing even had a fair shot.  So let me say a couple things about that first.

It should be hard to see if people are crying when they are wearing 3D glasses.  But on more than one occasion during the movie, it was easy.  I just checked to see if I was crying then I looked around.  By my count, 80% of the people in the theater teared up at certain parts for no reason other than you were seeing Wonder Woman in the way that made you feel differently than literally any other super hero on a screen has ever made you feel.

The movie makes you wish Wonder Woman were real.  Moreso than Superman or Iron Man or Thor or Batman ever have, or honestly ever could.  I have seen a lot of people compare Gal Gadot’s Wonder Woman to the Christopher Reeve Superman.  I understand it, but I also think that 1978 Kal El would have hoped he could be Diana when he grew up.  Here are the points that stuck out for me and again there will be spoilers mixed in.

She can act, so let’s put that aside from now on.  And when you see the movie (or see it again) notice how many times director Patty Jenkins relies almost completely on Gal’s face to move the story along.  I mean, you could make a case that 90 minutes of the camera on her face would do good box office.  She is beautiful beyond credulity.  And she delivers her lines with more feeling and passion than any line I have heard out of any super hero’s mouth ever.  Emotive, athletic and commanding, Gal Gadot shows us what Wonder Woman is: a god.

I found the three acts (Themiscyra, London, Belgium) to be doled out in increments that were on target.  Themiscyra looked amazing and the compact way the story got told was just enough for me.  London was brief but necessary, though I will say that a lot of the laugh lines didn’t pop in the theater.  I thought the audience was flat at first but then I realized that they really blew a lot of the comedy in that section in the trailers.  Etta Candy didn’t get the lolz she deserved, though the humor that hadn’t already been shown was good.

The third act changed history, literally, if what Diana figured out was true.  Essentially, the belief was that humanity as created by Zeus was good but Ares messed it all up and made us fight each other.  So the reasoning from Diana’s point of view was: get rid of Ares, get rid of war.  And in the movie (big surprise) it worked.  WW1 just stopped on a dime. But the repercussions of that would have to be felt in the rest of the DCEU.  I know Ares (played wonderfully by David Thewliss) isn’t DEAD but I also know that the effects of Diana’s actions vis a vis WW2 will have to be addressed.

The love story was organic, subtle and made the inevitable goodbye for Steve Trevor heart wrenching. It would be way too easy to make the joke that Diana fell for the first guy she ever met.  It was more than that.  Steve Trevor was so charming and earnest and honest that I would have fallen for him, too.  He was a perfect representative of why the world needs Diana.  Imperfect but good.  The flawed implementation of a really good idea.

I give the story, given that it had to implement the origin of a hero AND give a reason for her to even still be around AND give her a path to follow a solid B+.  I understand that Wonder Woman stayed on Earth to protect humanity and feels as though we are worth protecting.

He is great.  Funny, smart and crisp, his performance in this movie actually would make me watch a movie just because he is in it.  And Steve Trevor the character was the pillar that held up the movie.  He was the perfect Lois Lane, teaching when appropriate, and bouncing off Diana like he hit a brick wall whenever he tried anything that would be considered traditionally male (“I can’t let you do that”) or even traditionally movie.  He inspired Diana and he let her down.  And his death flipped the earlier dynamic from the amazing trench scene.

See, the gang needed to get to the gas bomb factory but Diana wanted to save the people in the town on the other side of No Man’s Land.  The tension came from his feeling like the big thing needed to be done and her saying that you can’t ignore the small thing.  At the end of the movie, when she needed to fight Ares, he explained that he needed to save the people from the giant plane.  He will save the day while she saves the world.  He learned the lesson she taught him and realized that it was worth his life.

I saw a lot of reviews complaining that the end of the movie was the “same old CGI blah blah” but honestly Diana is a GOD so what was she going to do,  arm wrestle?  She had a regular kung fu fight with Lutendorf and that was good, but since he was a red herring what was going to up the ante?  She needed to stop the god of war.  That was not going to happen with a speech.  And since she was also figuring out that SHE was the god killer, not the sword, and that she was a god herself, I would think that people would understand that there needed to be a good fight.

And the thing I liked the best about Ares was that even though he got all swole and armored up, you could still see his face through most of the fight.  He was still an actor in there, acting.

What does it mean for the DCEU?

Well, to me it means that Superman has some growth to undergo.  He is NOT the leader of the Justice League.  Neither is Batman.  Snyder, who was one of the writers of the movie, deliberately placed Diana at the head of the table.  She is as strong as Superman (and she is magic which he is vulnerable to) and she is more of a warrior than Batman.  She doesn’t blink an eye about killing.  She was born to kill.  Literally.  That was her job when Zeus made her.

So she is above all of them and I cannot wait to see more of her.

Full disclosure: I am a white guy.  I will discuss the meaning of Wonder Woman not in terms of what it means to feminists or allies or whatever else is going on.  I will say these things and you can draw your own conclusions.

I don’t remember the last time I saw anyone beam at a movie.  But Wonder Woman made people beam and I am going to see it again as soon as I get down to Charlotte.

And I will see it in 2D.  It doensn’t need any extra D’s.  And I mean that on every level.