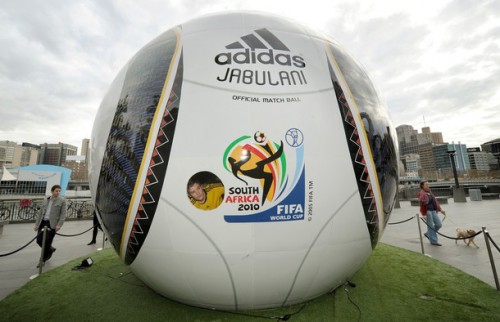 And we’re back with quarterfinals games and a GIGANTIC UPSET to start things off.

WHAT THE HELL HAPPENED. Brazil, five time champions, so many great players, so much talent and they allow the fine people of HOLLAND to come from behind and score TWO goals to win the game, making them the ultimate “no one thought we’d win” team, the wild card in your betting adventures and now the odd favorite against the winner of Ghana/Uruguay. Brazil UNRAVELED in the second half, giving up goals and proving that the Nike Ad Curse is FOR REAL, as Robinho was added to the commercial after Ronaldino wasn’t selected to the team. This man is as shocked as I am, considering that Brazil was 35-0-2 when leading at the half.

Holland has to be now the ultimate dark horse; the narrative has completely changed now. The old adage is that whatever hemisphere the World Cup is held means that a team in that same hemisphere would win. The other narrative was that this World Cup was to be all about South American and African dominance, with the old European guard declining. All that was true until the sea of Oranje rolled in to South Africa and did what no one else has done since 1950 – beat Brazil in a non-European country. I for one blame the Brazilian failure on eerie prophetic adverts and the appearance of Mick Jagger.

Like the last game Ghana played vs. the USA, this one went long. The Black Star Sex Machines seemingly cannot play for the win against non-loser teams at this tournament. The game was like an old school boxing match, with each side throwing haymakers, going long and damaging the mental capacity of everyone watching. Even the vuvuzela fans grew tired, with their horns going from deafening to some weird death knell. Over 100 minutes of action is tough on everyone it seems. The game went on so long that one of the main interesting parts was how this man didn’t kill himself during play. After a regulation/overtime finish that included 4 shots in two seconds, 4 blocks in two seconds, an illegal handball, a failed penalty kick (seriously this is why people like soccer at the international level) led to…. PENALTY SHOOTOUT TIME.

With insane drama surrounding it (Ghana being the last African nation and all), Uruguay’s goalkeeper Muselro turned from nervous young player to out and out ASSASSIN after blocking two kicks; just openly challenging the entire stadium to get it past the net. The game ended on the smartest shot in the whole tournament, as Uruguay’s Sebastian Abreau FLOATS it past the Ghanian goalkeeper to win and move on. Ian Darke said it best concerning the final goal and the Ghanian effort – “it was the cruelest exit I have ever seen.”

All These Songs are About People who Went Home, and the Maradona/Pele feud.

The coach for the South Korean team quit yesterday, after being cyber-bullied by angry Korean fans. Who in the hell over the age of 15 quits ANYTHING over cyber-bullying?

After South Korea suffered a crushing 4-1 defeat to Argentina, a barrage of cyber attacks on the coach notably over his decision to shuffle his defenders by bringing on Oh Beom-Seok for Cha Du-Ri happened. The coaches wife, Choi Mi-Na, told the Chosun Daily that she and their children had been deeply wounded by hurtful Internet postings. “I told him he should quit … The coach and all my family members have been hurt enough,” she said.

Even though Austria isn’t even involved in the World Cup that doesn’t stop them from making stupid decisions to capitalize on a minor trend. In this case, a $21,000 vuvuzela. The goldsmith, a man by the name of Klemenz Pointer took a regular vuvuzela (i.e.; a cheap, plastic horn) and applied thousands of dollars of white gold and diamonds. He basically bought those sticker sheets of fake rhinestones like the tweens put on their phones and did that to a plastic horn. Except it was not fake jewels.

Here are a gaggle of videos to get you hyped over Argentina/Germany.

I wanted to touch on the feud between Pele and Maradona for a second, as both are very diverse and polarizing people within the world of soccer. The debate of whom is the best ever is very Magic/Bird like, but with the added entertainment of this version of Magic/Bird having THIS MAN involved.

Pele on the comparison: “For 20 years they have been asking me the same question, who is the greatest? Maradona or Pele? I reply that all you have to do is look at the facts – how many goals did he score with his right foot or with his head?”

Pele on Maradona coaching the Argentines: “I don’t have a problem with Maradona, I just do not think he is a good coach. He has an outlandish lifestyle and rarely is that a positive thing for the team.”

Pele on Maradona’s influence and legacy: “My main doubt is whether he has the sufficient greatness as a person to justify being honored by a worldwide audience.”

Maradona on Pele: “Pele should go back to the museum.”

Maradona responding to Pele’s opinion that he is a negative example to soccer and his team: “He (Pele) lost his virginity with a young boy, so I don’t know what a good example is.”

As you can see, it has become a battle of icons; one the supposed angel, one the supposed devil. Both men reached the highest highs of their profession, with Pele going towards a more public persona and Maradona becoming a flaming train-wreck. It’s like Pepsi/Coke, with ACUTAL cocaine spiked in the latter soda.

Hot Girls Watch the Soccer – Celebrate yourselves, Netherlands and bring the 30 DUTCH GIRLS BACK.