World Cup 12: Everyone I Love was Killed by Germans 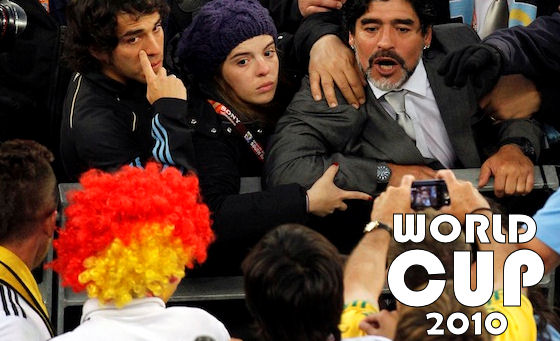 Still in mourning over Argentina, so let’s get the dirty facts out of the way.

From the day that Diego Maradona was named coach of the Argentina team many thought that a mistake of high caliber was made. Sure he was a great player but his off the field was a mess compared to the on field beauty. Being suspended for telling the media to “suck it and continue to suck it” at the press conference to ANNOUNCE his manager position, having a shaky at best qualifying campaign, lingering doubts about how far they would go didn’t factor ion the early rounds of Argentina’s World Cup campaign. They roamed like bikers across the pitch; wild movement, hard tackling and shots coming from all ends. Guarding the Argentineans was like the “double tap” tip from that movie Zombieland; even if you blocked one shot, you had to have your head on a swivel because some other long haired wild man in light blue and white was coming up for the rebound. It was momentum at it’s highest form, and there was the hopeful awaiting of Lionel Messi, scoreless so far, just waiting for the performance worthy of the hype.

That’s the funny thing about momentum – at one point you run out. Germany is the brick wall of this tournament; they have swagger, they are mostly young, they back up what they say and when you play them they appear to be playing with 22 men instead of the starting 11. They are a machine of scoring, extra passes and the right move every time. They are unselfish, they have a team first mentality and they all seem to have chips on their shoulder that they use in a way that is more precise than angry.

In retrospect the game was over two minutes in, at that first German goal. The Argentinean defense fell apart like a house of cards in the wind as Germans swarmed and scored; it was as if everyone was conditioned for a feeling out process while the Germans were conditioned to punch the giant in the mouth.

And the punch worked, as Germany did the one thing that made all of the analysts postulate in the pre game – WHAT would happen if Argentina didn’t score first, and had to comeback? Apparently what would happen is that Argentina fell apart, played desperate and began to unleash savage tackles, doing anything to stop the inevitable. They ran into the brick wall of the new favorites of the cup, a German team in the southern hemisphere, a team who has been using the ball that gives everyone else trouble for months, and a team that will end up winning this whole thing.

the battle of hot women fans took place as surprise Paraguay goes up against hyped Spain. A few words on Spain, as this game was long, defensive and painful until the end.

Spain, much like England are the team that on paper should blow everyone out but always seems to choke when it matters. Spain is beautiful offensively; they can make passes that look like threading a needle. Their defense is outstanding and rough. Their goalkeeper is among the best in the world. Guys like David Villa and Fernando Torres are transcendent scorers and they even seem to play as a team. Their main fundamental flaw is that when it matters, only David Villa steps up.

Villa stepped up in this game, scoring the only goal in a win, sending Paraguay home and making everyone remember that Paraguay chick has naked pictures up already. The problem that Spain has is that they now have to face Germany, the machine that can score four goals on ANYONE and a team that Spain can’t barely pass by. There will be no room for defensive lapses from Spain, as the Germans will make as many passes as needed to find open room to shoot. Being better on paper often time means that you’re just that; good on paper.

More songs about bitterness and people who are now home.

Ghana lost in heartbreaking fashion but at least they get to meet Nelson Mandella.

Even though Russia didn’t qualify, 8% of Russians polled think they can win it all.

Here is a feel good story about how a Uruguayan player received help with the care of his paralyzed sister from Diego Maradona long ago. Diego Foran (you know Maradona probably helped him simply due to the shared first name) of Uruguay dreamed one day to make enough money to never have to worry about not being able to care for his sister. After working his way through the leagues he finally got that big contract to Manchester United of the EPL so now he will never worry again.

How badly will you miss the vuvuzelas? If you said “not at all” you’re screwed, because even though other sports are banning them, China is still making tons of the cheap horns to ruin your live sporting experience domestically.

In Brazil, they take this way to seriously. Reports are coming out that at least 15 people are injured at Bangladesh hospitals after being “poisoned” by sedatives. What is happening is that the Brazilians are torn up by the loss, and according to doctor Firoz Ahmed, large numbers of fans are overdosing on sleeping pills as they “could not digest the loss”.

MARADONA (one last time with the capital letters in tribute) may quit the team after the loss to Germany. “I may leave tomorrow. I’ll have to think carefully about it and talk with my family and the players. There are many issues here.” says the man himself. Hey I like the guy, but that statement is not out of character.

Maradona also knows how to exit a game the right way; by attempting to fight every German fan in attendance.

In retrospect, England coach Fabio Capello should have ;et the players rest .

A few weeks ago ESPN’s “30 for 30” series did a GREAT documentary (“The Two Escobars”) on Colombia’s national team in the 90’s and the mirror images between this positive team and the negative culture surrounding drug kingpin Pablo Escobar and the cocaine wars. It was a battle of cultures as the national team was a symbol of what Colombia could be, but the drug wars were a symbol of what it was. Great movie, check it out. Anyways, The Colombians made some World Cup trophy replicas to ship to Spain. Problem was the fact that they consisted of 24 kilos of cocaine.

Something I noticed about my new bandwagon choice, the Netherlands – not only do they have a lot of fans, not only do 30 hot women go to their games, but they also date well.

Know how I know German is winning the whole thing? They got the lucky cardigan power on their side.

HOT GIRLS like the soccer – goodbye Argentina, hello Germany. There is certainly no need to talk.

Happening TODAY (really it happened after you’ve read this):

The story of surprise. Holland upset Brazil, have not yet lost, are nicknamed “the oranj”. Uruguay benefitted from many a big country choking out and drove a stake through Ghana’s hearts. Uruguay won the first ever World Cup in 1930, Netherlands have only been to the final game once in 1978. Prediction (this is being written before the game): NETHERLANDS 1, URUGUAY 0. Expect lots of passing and careful play.

Really the main event of the tournament, especially if Uruguay wins and gets into the finals. Spain looks good on paper but David Villa is the only one scoring (though he does it oh so well). Germany is the SOCCER MACHINE, rolling up and killing good teams like it’s no issue. If both teams play well, it still leads to the fact that Germany is playing out of their minds and they do have the power of the cardigan. Prediction: GERMANY 2, SPAIN 0. Germany doesn’t roll over Spain, but they do shut them out, leaving us with a European final in a southern hemisphere, and a 3rd place game in which Spain goes wild over Uruguay.